Has President Trump Gone Easy on Putin and Russia? 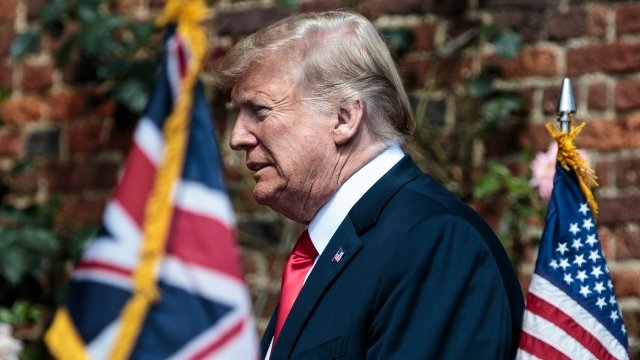 Even President Donald Trump’s strongest supporters have trouble explaining his rhetoric when it comes to Russia.

And it stands in stark contrast to how the president has talked about America’s allies during his ongoing international trip. Out of meetings with NATO leaders and British Prime Minister Theresa May, Trump said his summit with Putin may be the easiest of them all.

Trump's GOP defenders argue it is not what he says, but what he does, that counts most when dealing with Moscow. And the president himself has claimed to be "much tougher on Russia than Obama."

The independent fact checkers at Politfact rated that claim "mostly false." But there are some areas where Trump has taken more action than Obama did to counteract Russian influence.

Under Trump, the U.S. started selling lethal weapons to Ukraine to aid the country's battle against Russian-backed rebels. Trump also authorized airstrikes in Syria...after concluding that Syrian president and Putin ally Bashar al-Assad used chemical weapons against his own people.

Then there's the 60 Russian diplomats expelled by the administration in March, in response to the poisoning of a former Russian spy in Britain. It was the most significant U.S. purge of diplomats in more than three decades.

But the most contentious part of Trump's Russia policy has centered around sanctions.

Yes, under Trump the U.S. has imposed additional economic penalties on Russia. They build on what the Obama administration did after U.S. intelligence agencies concluded Moscow interfered in the 2016 election.

However, that was largely thanks to Congress, who mandated the new sanctions with a veto-proof majority in July 2017. Also included in the sanctions were limits on the administration's ability to ease the measures, a provision Trump strongly opposed.

"The rhetoric is extreme and unprecedented," international trade expert Judith Alison Lee told Newsy. "But there are limits and there are constraints on him. So we haven’t seen a huge shift yet in terms of our overall economic sanctions policy towards Russia."

That provision means those new sanctions won't be on the negotiating table when Putin and Trump meet in Helsinki, Finland on Monday. Trump can't offer to reduce those sanctions unless Congress is on board.

Despite that, experts say the leaders are likely to emerge with some tangible progress. Though a major diplomatic breakthrough is unlikely.

"I don't have a crystal ball — from my career experience, leaders don't usually go to summits unless they have deliverables," Simon Saradzhyan of Harvard's Belfer Center for Science and International Affairs told Newsy. "If you don't have deliverables, nobody wants a summit because you going to be questioned: why did you got meet this person, [and] shook hands if you have nothing to sign? So there has to be something to sign."