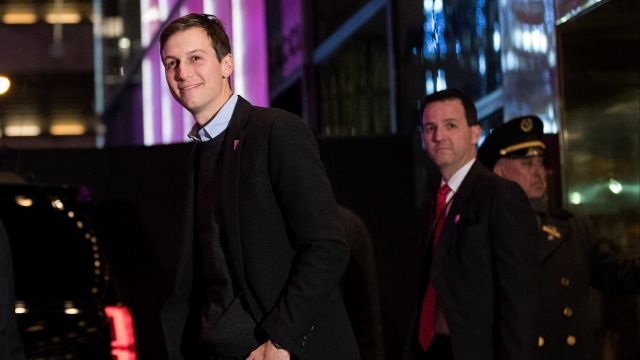 President-elect Donald Trump has given his son-in-law an important job in the White House.

Trump announced Monday that Jared Kushner will serve as his senior adviser. According to a statement, Kushner has decided not to collect his White House salary.

Kushner "will work closely" with Chief of Staff Reince Priebus and Chief Strategist Stephen Bannon, according to a statement.

The news comes days after Kushner and his wife, Ivanka Trump, reportedly settled on a home to buy in Washington, D.C.

Kushner played a key role in Donald Trump's campaign and during the transition. He was viewed as a gatekeeper and Trump's right-hand man.

Kushner was reportedly involved in the firing of former Trump campaign manager Corey Lewandowski and the ouster of transition chair Gov. Chris Christie, though he has denied it.

Kushner was behind the creation of the campaign's — until recently — unknown "data operation" based in Texas, which allowed the campaign to more precisely target voters while spending less on advertising.

Kushner was also reportedly looking to secure a financing deal to launch a TV network in the event Trump lost the election.

Kushner's appointment could run afoul of an anti-nepotism statute which forbids public officials — including the president — from appointing family members — including sons-in-law — to civilian positions under that official's jurisdiction. It's unclear whether the law covers the senior adviser role.

And there are other ethics issues. Kushner has run his family's real estate company for close to a decade.  According to The New York Times, Kushner was brokering a deal with a Chinese financial firm that has ties to the Chinese government just a week after Trump won the election.

Kushner is planning to step down as CEO of the company and divest "substantial assets," his attorney told Bloomberg.