Trump: Japan Not Exempted From Steel, Aluminum Tariffs At This Time 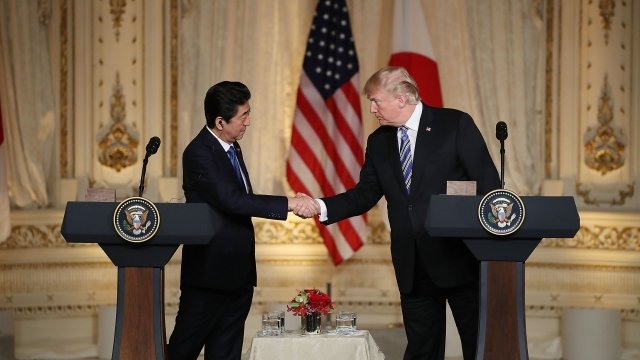 The president said he couldn't provide an exemption because of the "massive trade deficit with Japan."

President Donald Trump is not exempting Japan from the steel and aluminum tariffs at this time.

At a press conference with Japanese Prime Minister Shinzo Abe late Wednesday, Trump said he couldn't provide an exemption because of the "massive trade deficit with Japan."

The president did say he'd discuss relieving Japan of the taxes in the future if they could come up with a better trade deal.

The Trump administration's already temporarily exempted dozens of countries — including Canada, Mexico and members of the European Union — from the 25 percent tariff on steel and 10 percent tariff on aluminum.

"It's already shifting our jobs and work outside the U.S.," said one business leader.

And South Korea was granted a permanent exemption from the steel tariff after inking a new deal with the U.S. last month.

As The Associated Press pointed out, Japan is the only major U.S. ally that has yet to receive any sort of exemption from the taxes.

Trump and Abe said they're going to discuss "reciprocal" trade, though it's unclear if that means a bilateral trade deal is on the table.