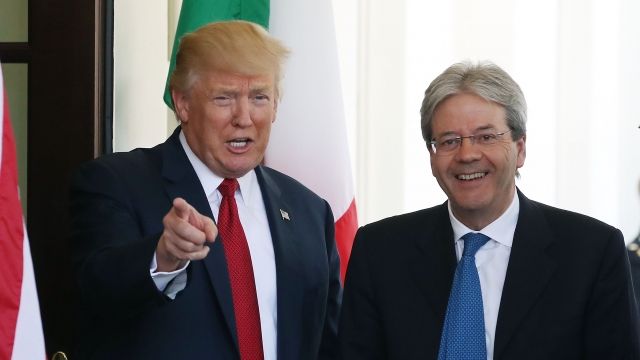 President Trump hosted Italian Prime Minister Paolo Gentiloni at the White House on Thursday, giving Trump an opportunity to talk about one of his favorite subjects — NATO defense spending.

"Will you commit to committing 2 percent of your GDP to the alliance going forward?" Fox News reporter John Roberts asked Gentiloni.

Trump responded, "Well, first of all, I love the question you asked the prime minister. I look forward to his answer, because I'm going to be asking him that same question very soon."

Italy currently spends a little over 1 percent of its GDP on the military alliance. NATO allies are encouraged to contribute at least 2 percent of their GDP, and Trump has been eager for European nations to meet those commitments. 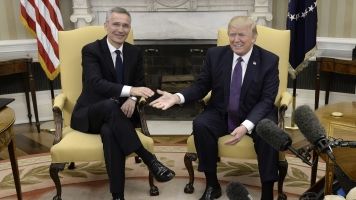 Gentiloni reaffirmed his country's pledge to reach 2 percent support for NATO, but also pointed to Italy's military presence in Iraq, Afghanistan and elsewhere as proof of his country's security commitment.

For his part, Trump reaffirmed his belief that a strong Europe is vital to U.S security.

The two leaders did diverge on one key defense issue — how the U.S. should be involved in stabilizing Libya.

Gentiloni said, "We need a stable and unified Libya. A divided country would make stability worse. The U.S. role in this is very critical."

"I do not see a role in Libya. I think the United States right now has enough roles," Trump responded.