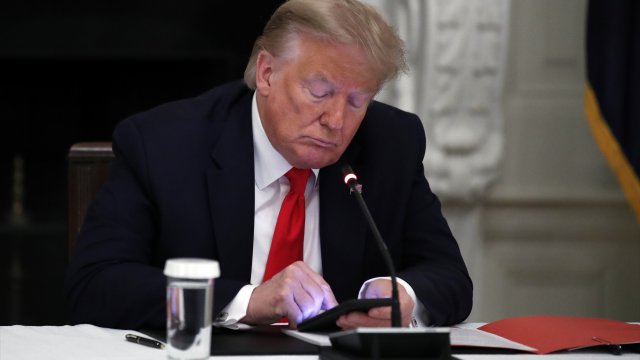 Republicans like Arkansas Gov. Asa Hutchinson say some of the attention Trump is bringing to the party is unnecessary.

President Trump was back on stage over the weekend...speaking to Republican donors in Florida...repeating unsupported claims of a stolen election.

He reportedly lashed out at some familiar names:

And some in his own party, including Senate Minority Leader Mitch McConnell...calling him a...quote…”stone cold loser” and using vulgar language.

Some attendees reportedly cheered the speech.

But other Republicans...those who have crossed swords with Trump in the past... expressed concerns over the future of the party.

“The former president is using the same language that he knows provoked violence on January 6th. You know, as a party, we need to be focused on embracing the constitution not embracing insurrection," Rep. Liz Cheney said.

“In some ways its not a big deal what he said but at the same time whenever he draws attention, we don’t need that," Gov. Hutchinson said. "We need unity, we need to be focused together. We have slim majorities or slim numbers in Washington, we have battles to fight and we need to get beyond that.”

"I think a lot of that rhetoric is, you know, it's part of the style and tone that comes with the former president, but I think he and Mitch McConnell have a common goal, and that is getting the majority back in 2022," Sen. john Thune said. "Hopefully that'll be the thing that unites us because if we want to defeat and succeed against the Democrats and get that majority back, that's the best way to do it."

The former president *did have some praise for fellow Republicans...Govs. Kristi Noem of South Dakota and Ron DeSantis of Florida for reopening their economies during the pandemic.

As far as Donald Trump returning to the White House...he told the crowd at Mar-a-Lago that any announcement would come after the 2022 midterm elections.