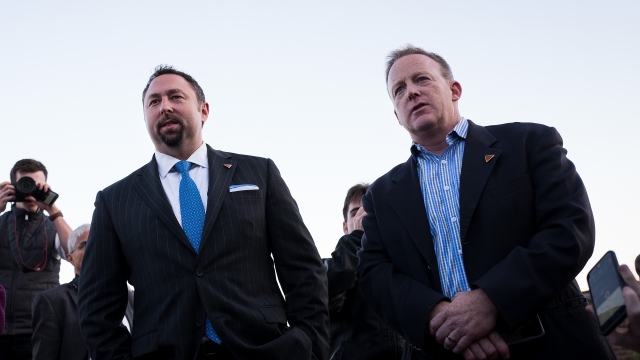 SMS
Trump's New Communication Team Looks Basically The Same As His Old One
By Grant Suneson
By Grant Suneson
December 22, 2016
Donald Trump appointed many members of his campaign communications team to similar roles in his administration.
SHOW TRANSCRIPT

Donald Trump is officially moving more of his campaign team and supporters into the same roles in the White House.

Sean Spicer, the current communications director for the Republican National Committee and an early Trump supporter, will serve as Trump's press secretary.

Spicer will work with other Trump campaign vets, like Jason Miller, who will serve as communications director; Hope Hicks, director of strategic communications; and Dan Scavino, social media director.

Spicer's appointment could have journalists breathing a sigh of relief. He's a familiar face in Washington and could help address worries that Trump is going to limit press access to the White House.

"Even looking at things like the daily White House briefing from the press secretary, there's a lot of different ways that things can be done, and I can assure you, we're looking at that," Priebus said on "The Hugh Hewitt Show."

How Trump will deal with the media is still anyone's guess. He bailed on a promised press conference where he was supposed to discuss his litany of conflict of interest problems. The president-elect hasn't held a press conference since July.