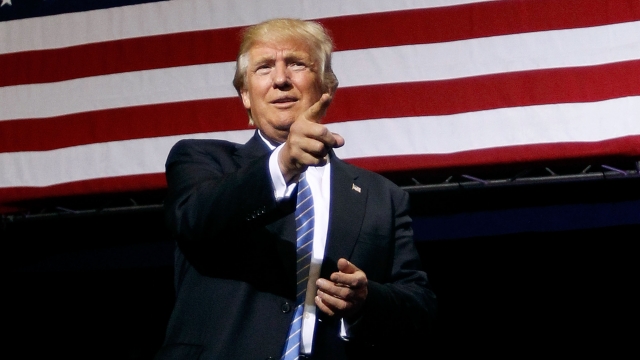 SMS
Trump's Military Endorsements Come With A Few Controversial Characters
By Ben Lawson
By Ben Lawson
September 7, 2016
The retired officers say the Obama administration damaged the military and that Trump can fix it.
SHOW TRANSCRIPT

In an open letter, 88 retired military generals and admirals pledged their support for Donald Trump.

The letter accused the Obama administration of damaging the military through "budget cuts, policy choices and combat operations."

It reads in part, "We support Donald Trump and his commitment to rebuild our military, to secure our borders, to defeat our Islamic supremacist adversaries and restore law and order domestically."

The letter has some notable and respected names like retired Maj. Gen. Sidney Shachnow, who survived the Holocaust before coming to the U.S. and joining the Army.

But others have been associated with notable scandals, like Lt. Gen. William G. Boykin, who was accused of casting conflicts against radical Islam as a religious war.

In 2003, he talked about an encounter with a Muslim warlord and said, "I knew that my God was a real God and his was an idol."

There's also Lt. Gen. Thomas G. McInerney who once submitted court documents accusing President Obama of being born outside the United States, challenging his eligibility to serve as president.

This letter comes as Trump and Hillary Clinton are focusing on national security issues.

On the same day the generals pledged support for Trump, Clinton released a campaign ad that shows veterans watching clips of some of Trump's most controversial comments on military strategy and people who serve.