Trump Expected To Meet With Security Officials On Afghanistan 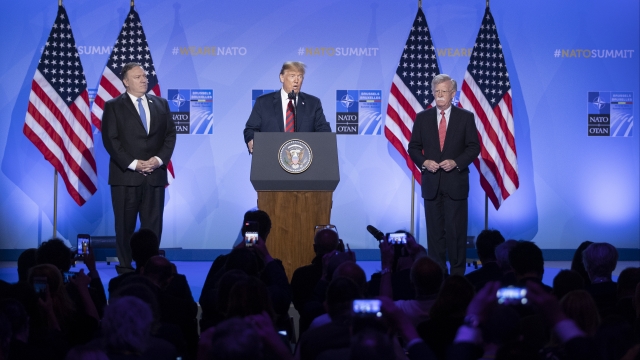 President Donald Trump was reportedly set to meet with his top national security advisers on Friday to discuss a U.S.-Taliban peace plan.

The plan could end the war in Afghanistan — the longest U.S. war in history.

Sources told CNN the president was expected to meet with Secretary of State Mike Pompeo and National Security Adviser John Bolton at his Bedminster golf resort in New Jersey. Secretary of Defense Mark Esper and Chairman of the Joint Chiefs of Staff General Joseph Dunford were also expected to attend.

Negotiators have been working on the plan for months. It's not completely finalized, but is expected to include counterterrorism commitments on the part of the Taliban, withdrawal of thousands of U.S. troops and a ceasefire between the U.S. and the Taliban.

But since the Taliban do not recognize the Afghan government, the conflict could continue even with U.S. troops gone.

Sen. Lindsey Graham urged the president to maintain an American military presence in Afghanistan. In a statement Friday, he said: "American service members are not acting as policemen in Afghanistan. They are the front-line of defense for America against the reemergence of radical Islamist groups who wish to attack the American homeland."