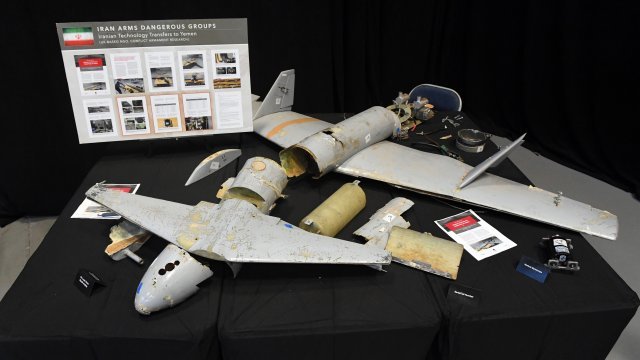 SMS
US Hopes Weapons Debris Will Get The UN To Crack Down On Iran
By Matt Picht
By Matt Picht
January 29, 2018
President Trump is letting the U.N. Security Council members examine missile debris the U.S. is holding up as proof Iran is violating arms treaties.
SHOW TRANSCRIPT

President Donald Trump is still sticking with the international agreement on Iran's nuclear program in spite of what he's said. But the Trump administration is finding plenty of other ways to crack down on Iran.

During a working lunch, Trump invited members of the U.N. Security Council to view a collection of debris from missiles and weapons. The U.S. claims Iran illegally gave those weapons to Yemen's Houthi rebels.

Those rebels have fired ballistic missiles at civilian targets in Saudi Arabia — though the attacks were intercepted before they could do much damage. The U.S. argues Iran is complicit in these attacks.

During a presentation of the debris in December, U.S. Ambassador to the United Nations Nikki Haley said, "It's hard to find a conflict or a terrorist group in the Middle East that does not have Iran's fingerprints all over it."

A U.N. review finished in mid-January also concluded Iran was breaking a weapons embargo by letting those missiles fall into Houthi hands. But support from Russia, Iran's ally, will probably shield the Middle Eastern country from any serious repercussions at the Security Council. 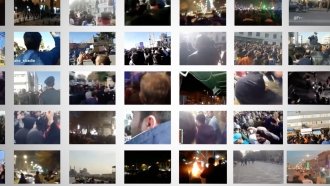 What We Can Learn From Listening To Iran's Protest Slogans

The Trump administration has slapped new sanctions and ratcheted up the pressure on Iran over its ballistic missile program. But so far, it hasn't reinstated the punishing sanctions that were suspended in exchange for Iran freezing its nuclear program.

Instead, Secretary of State Rex Tillerson says the U.S. is trying to rework the Iran deal with its European partners. But renegotiating the original deal means Iran and Russia will have to cooperate, which seems unlikely right now.

And Trump says if he doesn't see progress toward a better agreement in a few months, he'll terminate the deal, once and for all.