Is John Kelly On The Outs With Trump? It Depends On Who You Ask 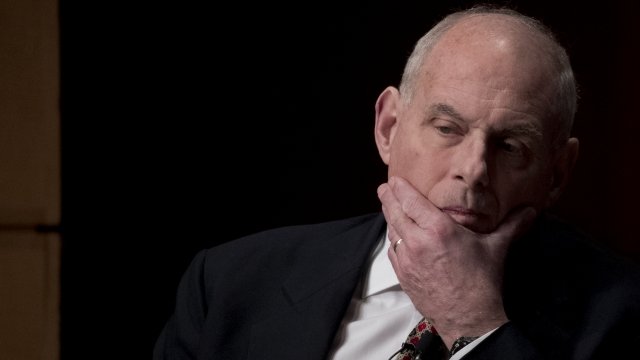 SMS
Is John Kelly On The Outs With Trump? It Depends On Who You Ask
By Ethan Weston
By Ethan Weston
April 8, 2018
A number of recent reports have suggested Kelly and President Trump's working relationship isn't doing so well.
SHOW TRANSCRIPT

The Post published the article Saturday. It cited 16 administration officials, advisers and confidants who say the president and Kelly argue regularly and that Trump is less interested in taking Kelly's advice.

The president may have targeted the Post, but it's far from the only outlet reporting things between Trump and Kelly aren't exactly rosy.

Axios reports Kelly threatened to quit back in March and that friends were called to calm him down.

And The Associated Press reports Kelly is often frozen out of day-to-day operations in the White House.

All that being said, at least one White House official told The Washington Post that Trump still talks to Kelly more than any other official but that their dynamic has changed.