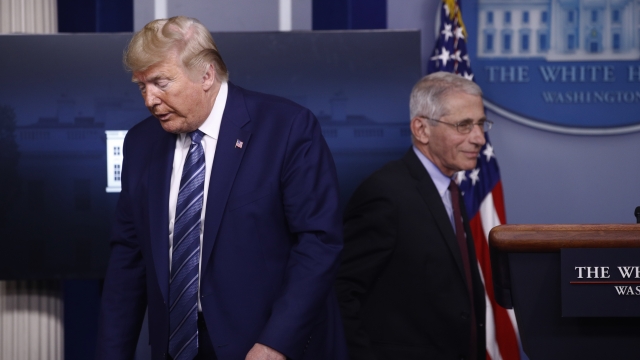 President Donald Trump is continuing to routinely tout the antimalarial drug hydroxychloroquine as a potential COVID-19 treatment across social media and in White House press briefings. That's despite his own experts saying there's no strong evidence that the drug is effective. This mixed messaging came to a head during a press conference over the weekend, when Trump  blocked Dr. Anthony Fauci from answering a question about hydroxychloroquine.

President Donald Trump: "But I think people should — if it were me — in fact, I might do it anyway. I may take [hydroxychloroquine]. Okay? I may take it. And I’ll have to ask my doctors about that, but I may take it."

CNN Correspondent Jeremy Diamond: "And would you also weigh in on this issue of hydroxychloroquine? What do you think about this and what is the medical evidence?"President Donald Trump: "You know how many times he’s answered that question?Diamond: "I’d love to hear from the doctor."Trump: "Maybe 15. 15 times. You don’t have to ask the question."Diamond: He’s your medical expert, correct?Donald Trump: He answered that question 15 times.

At this point, researchers say there aren't enough reliable studies to back up Trump's claims. For instance, it's believed Trump started pushing for hydroxychloroquine after seeing studies from Professor Didier Raoult which reportedly found that the drug eradicated COVID-19 in some patients. But researchers say those studies used a flawed methodology and aren't reliable.

"This study from France involved basically 20 patients who were treated with hydroxychloroquine," said Dr. Jeffrey Linder, chief of general internal medicine and geriatrics at Northwestern Medicine. "They excluded a number of patients from the study who didn't take the chloroquine — something like six patients — because three of them went to the ICU. One of them died. One of them left the hospital, and the other one stopped because of nausea. All it showed was that it reduced the amount and duration of which it seemed like people might be contagious with COVID-19."

Even Fauci has pushed back on hydroxychloroquine as a COVID-19 cure-all. Fauci recently told Fox & Friends: "We’ve got to be careful that we don’t make that majestic leap to assume that this is a knockout drug. We still need to do the kinds of studies that definitely prove whether any intervention is truly safe and effective."

But that's still led to fatal misinformation. An Arizona man died after he and his wife reportedly drank a small amount of chloroquine phosphate contained in a fish tank cleaner after watching President Trump's briefings. The woman told NBC News they felt the drug was safe because "Trump kept saying it was basically pretty much a cure."

The Trump administration says it is sending millions of doses of the drug to hospitals. Many are now testing it in controlled studies to try to determine whether the the reality lives up to the White House hype.