Trump Continues To Back Kavanaugh, Says 'Senate Must Vote' 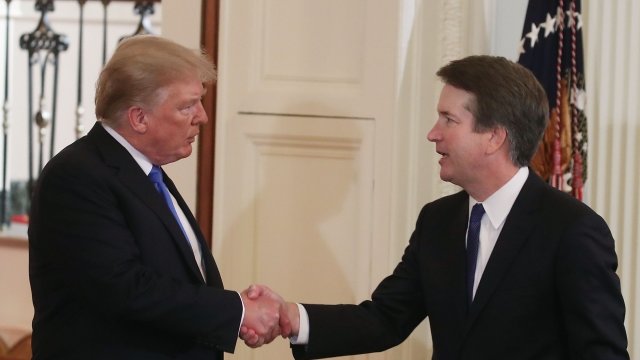 President Donald Trump will continue to stand behind his Supreme Court nominee Brett Kavanaugh, following hours of testimony by Kavanaugh and his accuser, Christine Blasey Ford.

After the hearing Trump tweeted: "Judge Kavanaugh showed America exactly why I nominated him. His testimony was powerful, honest, and riveting. ... The Senate must vote!"

Kavanaugh has been publicly accused of sexually assault by Ford and of sexual misconduct by two other women. Two anonymous allegations of misconduct have also been made.

Trump has been supportive of Kavanaugh since the accusations came to light but on Wednesday, offered a willingness to change course after the hearing. He said, "I can always be convinced. It's possible I'll hear [the allegations] and I'll say, I'm changing my mind!"

During her testimony Ford told the committee she is 100 percent certain it was Kavanaugh who assaulted her at a party when the two were in high school. Kavanaugh denied the claim and suggested someone else attacked Ford.