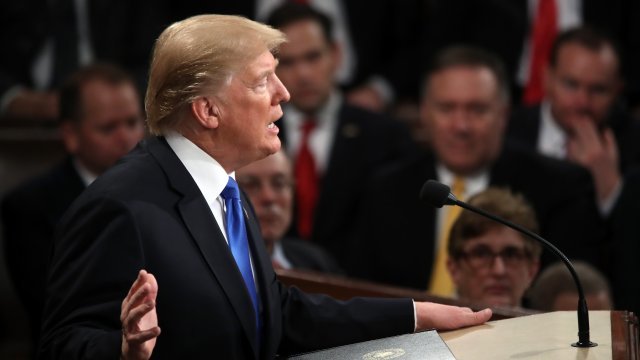 SMS
Trump's State Of The Union Address Hit North Korea Hard
By Matt Picht
By Matt Picht
January 30, 2018
Several of the guests the president invited to his first State of the Union highlighted the brutality of North Korea's regime.
SHOW TRANSCRIPT

President Donald Trump highlighted several of America's adversaries during his State of the Union address, but there was one threat that he gave pride of place to: North Korea.

"No regime has oppressed its own citizens more totally or brutally than the regime in North Korea," he said.

The president brought several guests to highlight that brutality, including the family of Otto Warmbier, the college student detained in North Korea and sentenced to hard labor for allegedly trying to steal a poster. 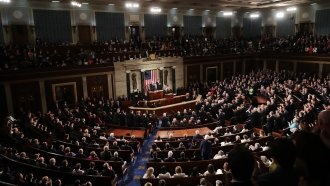 North Korea released Warmbier from captivity after 17 months, but he arrived in the U.S. comatose and died just days later. The Warmbier family is currently suing North Korea for wrongful death.

Trump also brought North Korean defector Ji Seong-ho, who survived the country's brutal famine of the 1990s but lost his left hand and foot in a train accident. 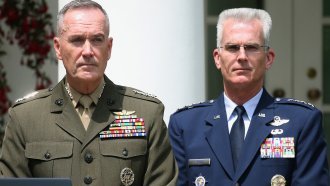 Ji escaped to the South in 2006 and now runs an activist group broadcasting information into North Korea.

North Korea has traded threats and insults with Trump throughout his first year in office. But the Hermit Kingdom recently softened its approach by opening talks with South Korea and agreeing to participate in the upcoming Winter Olympics in South Korea.

Trump's speech suggested he wasn't interested in any of North Korea's overtures.

"Past experience has taught us that complacency and concessions only invite aggression and provocation," he said. "I will not repeat the mistakes of past administrations that got us into this very dangerous position."