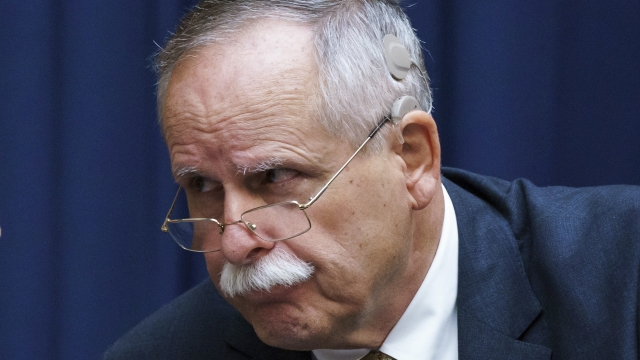 Two incumbent GOP congressmen who have taken dramatically different approaches to their time in office are facing off in West Virginia's 2nd Congressional District, one of the most-watched U.S. House primaries on the day's ballot. Reps. David McKinley and Trump-backed Alex Mooney were pitted against each other after West Virginia lost a congressional seat based on the results of the 2020 U.S. census.

Throughout West Virginia on Tuesday, voters were heading to polling places at schools, churches and public libraries.

Susan Smith, a small business owner in Valley Grove, West Virginia, voted for Mooney at a local elementary school Tuesday morning. She lives in McKinley's former district and said she always voted for him in the past. But not in this election.

"When Mr. McKinley started voting with the Democrats and the current administration, that's when things changed," said Smith, who cited McKinley's vote for President Joe Biden's infrastructure bill and the Jan. 6 commission. "I'm sorry to be losing a congressman, but we cannot have a Republican congressman voting with the Democrats. West Virginia did not need the money from this un-infrastructure bill."

Lowell Moore, a retired highways worker and county commissioner in rural Tucker County, said the choice was clear to support McKinley. He said he's already seeing the benefit of federal infrastructure money in work being done to complete Corridor H, the last remaining section of the Appalachian Development Highway System in West Virginia.

Moore said completing Corridor H will cut the response time for emergency services in half in Tucker County, which does not have a hospital and where first responders now have to travel on winding mountain roads.

West Virginia's election is the first of five primaries in which two incumbent U.S. House members will face off. It will be followed by similar contests in Georgia and Michigan and in two Illinois districts.

The primary comes on the heels of a victory by Trump-endorsed conservative JD Vance, author of the bestselling memoir "Hillbilly Elegy," who defeated six other candidates to win the Ohio Republican primary for U.S. Senate last week. The West Virginia contest will once again test the former president's clout when his own name isn't on the ballot.

Nebraska voters will nominate candidates on Tuesday to fill the seat abandoned by U.S. Rep. Jeff Fortenberry, a Republican who resigned from office and ended his reelection bid after he was convicted of lying to federal authorities about an illegal campaign contribution. Fortenberry's name will still appear on the ballot for the 1st Congressional District because he withdrew after a deadline to certify the ballot, but Sen. Mike Flood, a former speaker of the Nebraska Legislature, appears to have the advantage over five other Republican candidates.

Voters will also pick nominees for Nebraska's 2nd Congressional District in the Omaha area. Three-term Republican Rep. Don Bacon faces a long-shot challenge from Steve Kuehl, an Omaha consultant who got a shoutout from Trump when the former president visited earlier this month.

Trump blasted Bacon as a "bad guy" during a recent rally in the state and had criticized him previously for his support of a federal infrastructure bill that most GOP lawmakers opposed. Bacon also has been mildly critical of Trump in the past, saying the former president bore some responsibility for the Jan. 6 riot at the U.S. Capitol.

Trump stopped far short of officially endorsing Kuehl, however, saying: "I think Steve will do well. Good luck, Steve, whoever the hell you are."

Democrats in Nebraska will nominate either state Sen. Tony Vargas of Omaha or Alisha Shelton, an Omaha mental health therapist, to challenge Bacon in the 2nd, the state's only competitive district.

In the rural, geographically vast 3rd Congressional District, Republican U.S. Rep. Adrian Smith faces a challenger but is expected to win his party's nomination. Two Democrats are vying for their party's nomination within the district, which is overwhelmingly Republican.

In West Virginia, incumbent Rep. Carol Miller is expected to hold her seat in the 1st Congressional District against four Republican challengers.

In the state's 2nd Congressional District, where McKinley and Mooney are battling each other for the GOP nomination, openly gay former Morgantown city councilor Barry Wendell is competing against security operations manager Angela Dwyer in the Democratic primary.

Rep. David McKinley, a civil engineer by trade, received endorsements and praise from Democratic U.S. Sen. Joe Manchin and GOP Gov. Jim Justice over his infrastructure vote. He said it was time to put party politics aside to meet the needs of his constituents.

"This wasn't for Joe Biden — this was to help West Virginia," he told The Associated Press.