Trump, Clinton Might Not Be Best Candidates To Win General Election 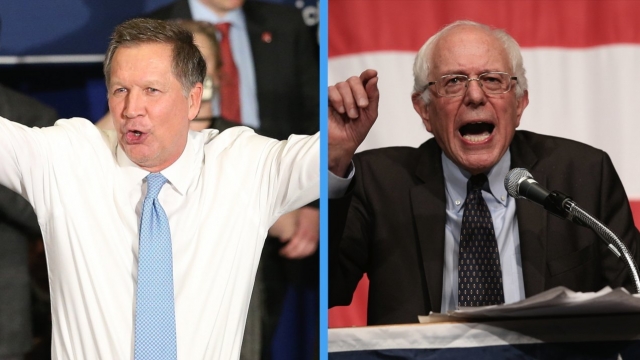 SMS
Trump, Clinton Might Not Be Best Candidates To Win General Election
By Ryan Biek
By Ryan Biek
March 22, 2016
A new poll shows that while Trump and Clinton perform well against candidates of their own parties, they don't when competing across the aisle.
SHOW TRANSCRIPT

By now, we all know Donald Trump and Hillary Clinton lead the races for their respective parties' presidential nominations, and by a lot.

But the question is, are Trump and Clinton really the best candidates from their parties to win the general election?

A recent CNN/ORC poll found that while Trump and Clinton perform extremely well against candidates of their own parties, they don't when competing across the aisle.

Bernie Sanders and Clinton both would beat Trump by double digits, according to hypothetical general election matchups.

Eliminate Trump, though, and Clinton's race gets a lot tighter. Ted Cruz would tie with her in a hypothetical matchup, and John Kasich would beat her by 6 points.

Kasich fares the best against the Democratic front-runner, yet only 17 percent of Republican voters polled want him to get the nomination.

However, a large majority –– 65 percent –– of Republicans said if Trump wins the nomination, they would not want to see another Republican candidate run in the general election as a third-party candidate.

On the Democratic side, Sanders actually performs better than Clinton against every Republican candidate. But it's becoming more and more unlikely he'll get the Democratic nomination.