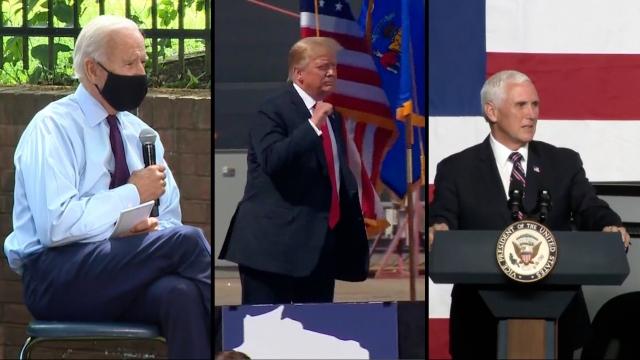 The presidential campaigns were on the ground in key swing states Thursday, focusing on two main issues: the coronavirus and jobs.

"I'm thrilled to be here with you on this incredible summer day in Wisconsin," said President Trump.

President Trump and Vice President Pence's visits came as Wisconsin and Ohio continue to battle the coronavirus. New cases didn't peak in Wisconsin until late May, and the percentage of positive cases has gone up in recent days. In Ohio, the number of new cases started going up in early June. At the events in both states, very few people were wearing masks. Across the country, dozens of states are dealing with spikes in cases, but the Trump administration continues to downplay concerns.

"And we're up to almost 30 million tests. That means we're going to have more cases. If we didn't want to test, or if we didn't test, we wouldn't have cases. But we have cases because we test. Deaths are down. We have one of the lowest mortality rates. We've done an incredible, historic job," said President Trump.

The president has focused on jobs throughout his presidency, but that's become especially important since the coronavirus forced the country to shut down. The latest weekly unemployment report shows 30.5 million Americans are claiming unemployment benefits.

"This contract will support your 1,500 full-time employees, and it will also enable you to hire another 1,000 people all across the shipyards in Wisconsin. It's one of the biggest contracts you've ever seen in the state," said the president.

"They got a great team here doing the retooling, doing the engineering. But I know in the months ahead, they're going to be ramping up production. Steve was telling me by about this time next year, they plan to hire five, six, seven, 800 people in this community and turn this factory all the way back on," said Pence.

Presumptive Democratic nominee Joe Biden has stayed close to his home in Delaware throughout the pandemic. He traveled to Pennsylvania again today to meet with families impacted by the Affordable Care Act, specifically its coverage for preexisting conditions. Biden criticized the Trump administration for recently filing a brief at the Supreme Court expressing support for a lawsuit that aims to strike down the ACA as a whole.

"Some survivors will experience lasting health impacts like lung scarring and heart damage. And if Donald Trump prevails in court, insurers would be allowed once again to strip away coverage or jack up premiums simply because of the battle they survived in fighting coronavirus."

The president has called recent surveys "phony", and his campaign has been quick to point back to 2016 polls that showed Hillary Clinton in the lead.