Why Trump Believes Migrant Caravan Is 'A Great Republican Issue' 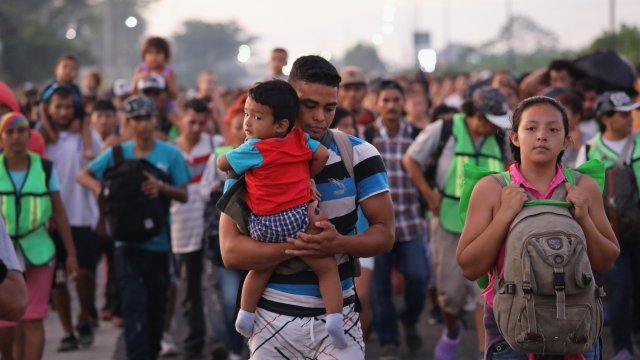 By Ben Schamisso
October 22, 2018
With the midterms less than two weeks away, President Trump has seized on the caravan to amp up his attacks on immigrants and Democrats.
SHOW TRANSCRIPT

A migrant caravan making its way toward the U.S.' border with Mexico has expanded to some 7,000 people. And in the eyes of President Donald Trump and other high-profile Republicans, that's a midterm blessing.

"This is a great Republican issue," Trump told reporters on Friday in Arizona.

“Sometimes politicians and their consultants and everybody does all this planning and then history just picks things up and changes everything,” former House Speaker Newt Gingrich told Fox News last Wednesday, referring to the caravan.

With the midterms less than two weeks away, President Trump has seized on the caravan to amp up his attacks on immigrants and Democrats.

"The Democrats want to throw open your borders to deadly drugs and gangs and anybody else that wants to come in," President Trump told supporters at a rally in Nevada on Saturday.

"You have some very tough criminal elements within the caravan," President Trump told reporters later that day.

While unfounded, the president's assertions did get a boost from these Friday visuals of caravan members marching through a Guatemalan border fence with Mexico.

Either way, experts say the president's renewed emphasis on illegal immigration, crime and the need to protect borders reflects a simple messaging tactic. Poll after poll show that GOP voters see "illegal immigration" as one of the nation's most urgent problems.

Besides, Republican strategists are eager to move the immigration debate away from the humanitarian harm caused by the government's separation practice and back to national security and law-enforcement.

As for Democratic candidates, they have been instructed not to engage with Trump's attacks in order to pivot the conversation towards health care and income inequality.