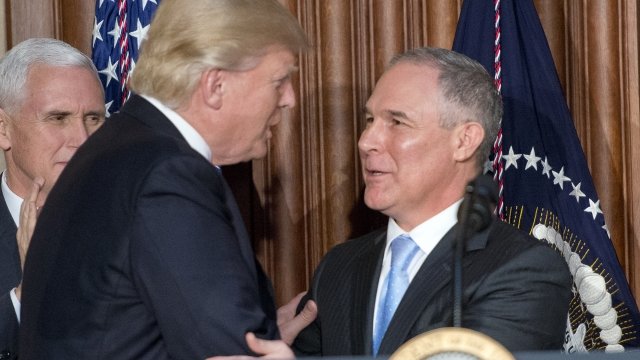 President Donald Trump reiterated his support for Scott Pruitt, the head of the Environmental Protection Agency, amid a number of damaging news stories tied to questionable ethics decisions.

When the president was asked if he still had confidence in Pruitt, Trump said twice, "I do." Earlier this week, Trump reportedly told Pruitt he supported him and to "keep your head up" and "keep fighting."

But White House press secretary Sarah Sanders told reporters on Wednesday "the president is not" OK with the most recent potential ethics violation involving Pruitt.

It was revealed the EPA head rented a Washington, D.C., apartment from the wife of an energy lobbyist for below market value. Pruitt and his daughter both stayed there. The White House is reportedly looking into it.

Before that, The Atlantic reported Pruitt skirted White House regulations to give his two favorite aides raises totaling almost $85,000. And a House committee and the EPA inspector general are investigating accusations that he used taxpayer money for first-class, business-class and military travel totaling more than $150,000. A senator has also questioned him about a five-day trip that cost $40,000.