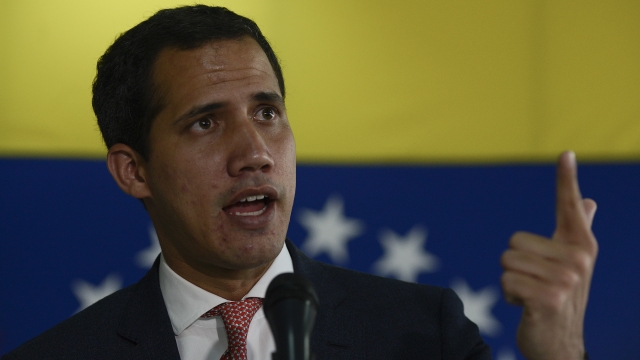 The U.S. is more than tripling aid in development assistance for Venezuelan opposition leader Juan Guaidó. It's reportedly the first time the U.S. has directly funded Guaidó.

The U.S. Agency for International Development announced Tuesday that it will give $52 million to programs in Venezuela that support the country's National Assembly, independent media, civil society and the restoration of the health sector.

Earlier this year Guaidó — who is the head of the National Assembly — declared himself Venezuela's interim president. The U.S. and other countries quickly jumped to support him, overstepping Venezuelan President Nicolás Maduro, who was sworn in for his second term in office at the beginning of the year. Maduro had won the country's controversial 2018 elections, which many countries and political leaders say were rigged.

Millions of Venezuelans have fled the country since 2015 to live as refugees or migrants elsewhere. Most of them have gone to Colombia. But others fled to Brazil, Peru, Chile, Ecuador and Argentina.

The USAID said in a statement that the "rampant corruption, brutal repression, and vast political and economic mismanagement of the illegitimate Maduro regime" has led to what the agency called the "largest external displacement in the history of the Western Hemisphere."

This new funding is in addition to hundreds of millions of dollars in humanitarian aid the U.S. has already provided to help with the "Venezuelan regional crisis." That includes providing support to vulnerable Venezuelans and the communities that host them.

USAID said Tuesday's assistance announcement "serves as another example of our commitment to help Venezuelans recover their country."