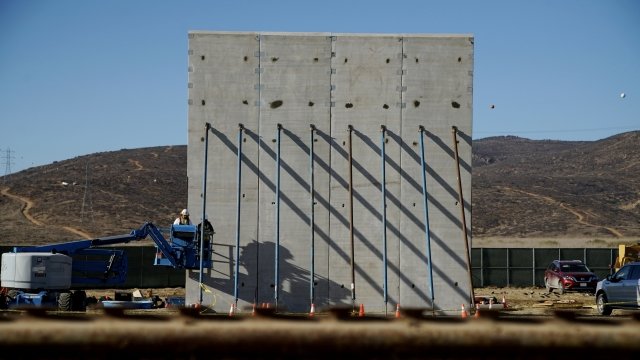 Customs and Border Protection plans to judge prototypes based on three main criteria once all eight designs are completed.

In a remote area near the San Diego-Tijuana border, the Trump administration is preparing to test a few types of walls.

Construction on eight border wall prototypes is nearing deadline. Each are up to 30 feet tall and will be compared.

Four of the prototypes are solid concrete, and four incorporate other construction materials. At least one has spikes.

Construction began at the end of last month. Customs and Border Protection said last week some of the eight prototypes were almost finished as construction on others started.

Once they're all built, CBP will judge the walls' scalability, durability and how hard they are to tunnel beneath.

But picking a favorite is by no means a guarantee any will be implemented.

Senate Democrats have estimated the U.S.-Mexico border wall President Donald Trump has envisioned could cost nearly $70 billion; other estimates are between $21 billion and $40 billion.

The Trump administration already asked for $1.6 billion from Congress to build along 74 miles of land. That request is still pending. Congressional Democrats have, in general, opposed Trump's border proposal.