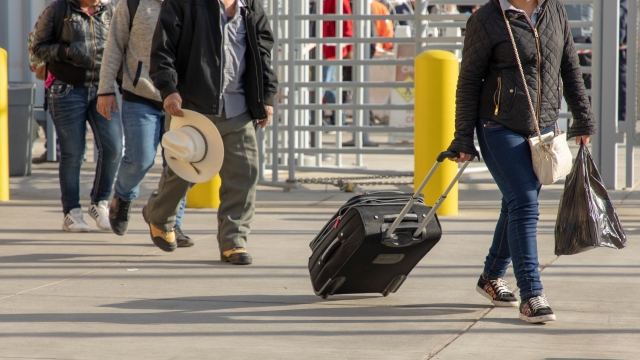 The courts would reportedly be used to cut down on the processing times for people seeking asylum in the U.S.

The Trump administration may build temporary immigration courts along the U.S.-Mexico border, according to CNN.

An unnamed administration official told the news outlet that it's working to figure out which ports of entry could use such a court for migrants seeking asylum in the U.S.

The Department of Homeland Security said in May that it had already sent roughly 6,000 asylum-seekers back to Mexico so far this year to wait out their immigration hearings.

The Trump administration most recently expanded its Migrant Protection Protocols under an agreement it struck earlier this month with Mexico to stem the flow of Central American migrants trying to reach the U.S. Under that agreement, Mexico said it would offer jobs, education and health care to those migrants, and the U.S. promised to speed up its processing of their asylum claims.

This is where those additional immigration courts would come in handy. When the policy was rolled out, U.S. officials said migrants would only have to wait in Mexico for 45 days to see an immigration judge.

But one asylum-seeker told BuzzFeed News last month that he'd been ordered to wait until next February to make his court appearance. DHS has not specifically addressed the longer wait times, but the U.S. asylum system is reportedly working through a backlog of almost 900,000 cases. The temporary immigration courts could help cut down on that caseload if they're built.