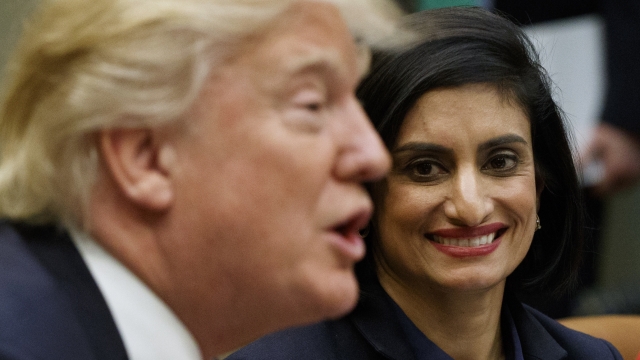 The Trump administration has released a new policy that gives states the option to receive some of their federal Medicaid funding in the form of block grants — if they agree to cap how much of that funding they accept.

Seema Verma, the administrator for the Centers for Medicare and Medicaid Services, introduced the "Healthy Adult Opportunity" plan on Thursday, which she called "groundbreaking." The plan would only affect adults under 65 who do not have disabilities. States would need to apply for a federal waiver in order to participate.

Verma said the policy would give states greater flexibility and let them get in on shared savings under certain requirements. To name one example, Medicaid covers all prescription drugs, but the program would let states have more say in which drugs are covered.

GOP-led states looking to limit Medicaid spending are more likely to be on board with it.

Oklahoma Gov. Kevin Stitt, a Republican, called the new policy "a game-changer" and said he hopes his state will be one of the first to apply for the waiver.

But many House Democrats are not fans — they wrote a letter to the Department of Health and Human Services secretary on Wednesday about their concerns. They argued the block grant program would let state governments cut benefits and "further limit access to publicly funded health care."

They wrote: "Medicaid block grants necessitate cost-cutting measures like restricting enrollment, decreasing provider reimbursement, and limiting eligibility and benefits through managed care. These actions endanger the lives of the most vulnerable patients, the population Medicaid was created to protect."

According to CMS, the policy would not let states strip benefits or limit eligibility because they'd still have to meet certain minimum standards.