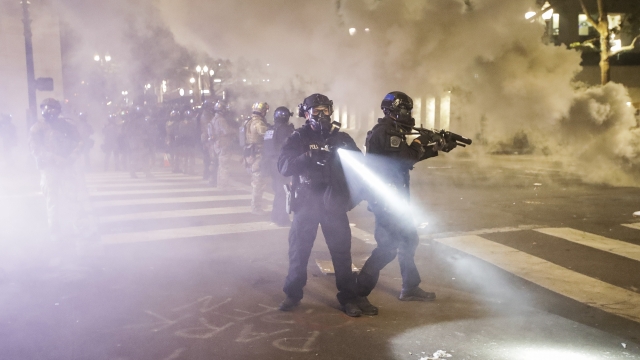 Brown said the agreement includes an increase of Oregon State Police officers downtown to "protect Oregonians' right to free speech and keep the peace." A team of federal officers that typically guards the inside of the courthouse will stay in place.

But Acting Homeland Security Secretary Chad Wolf said in a statement that federal agents will remain in Portland until he's assured "federal properties will no longer be attacked and that the seat of justice in Portland will remain secure." Earlier in the day, President Donald Trump told reporters federal officers wouldn't withdraw until Portland "clean[s] out their city" and "get[s] rid of the anarchists and agitators."

Nightly protests over racial injustice and police brutality in Portland began in late May after the death of George Floyd. President Trump deployed federal law enforcement officers to the area in early July as more and more protests turned violent. But that's only inflamed tensions further.

Videos of the protests show federal agents responding night after night with tear gas, pepper balls, and stun grenades as demonstrators throw fireworks, bricks and rocks at the city's federal courthouse and the officers surrounding it. Attorney General William Barr defended the federal response this week, saying the situation would be worse if the agents weren't there.

Brown said in a statement Wednesday: "The departure of federal forces represents the beginning of a process that will be as difficult as it is overdue. If slavery is America’s original sin, then anti-Blackness is Oregon’s."

Oregon was founded as a Whites-only state. It passed laws to exclude Black people from settling there even before it was officially a state. While such laws have been repealed in the past hundred years, the effects linger. Only about 2% of the state's population is Black, compared to 13% nationally.