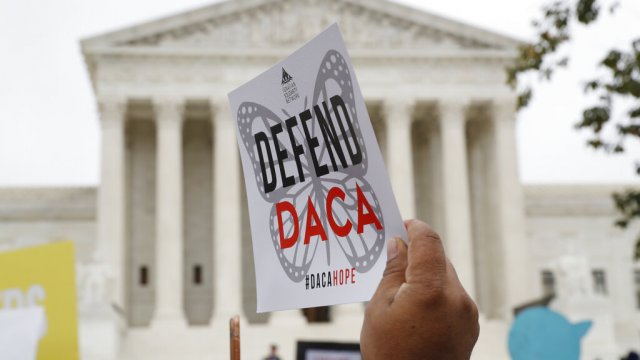 The Trump administration is reportedly entering some questionable legal ground just a few weeks after the Supreme Court blocked the White House's attempt to strike down DACA.

That's the program that shields from deportation roughly 650,000 undocumented immigrants who came to the U.S. at a young age.

"I don't think the Supreme Court could have been more clear," said Ur Jaddou.

Ur Jaddou was the top lawyer at the agency that oversees legal immigration during most of President Obama's second term. She says the Trump administration is clearly violating the Constitution.

"You have to return to the moment where DACA was not rescinded. And that means initial applications and renewal applications, both must be processed."

Virtually every analyst says the government must now offer the deportation protection to anyone who qualifies under the original terms of the Obama-era program. But the administration appears to be defying the Supreme Court's order — now a mandate — by rejecting new DACA applications and only processing renewals.

"I find that appalling that any government would do that and defy one of the branches of government in our Constitution," Jaddou says.

On Friday, a federal judge confirmed that the government needs to restore the DACA program in full. U.S. Citizenship and Immigration Services, which administers the program, tells Newsy it has rejected some first-time DACA requests in the past couple weeks because of errors in their applications.

Newsy was unable to verify the validity of that claim, and the agency did not clarify if they are now officially accepting new applicants.

Besides potentially defying the country's highest court, the administration is also denying immigration benefits to around 300,000 people who don't have DACA protections yet but are eligible. That includes Andrea Anaya.

"I felt, like, just really down, because I didn't have protection, I couldn't get a license since I couldn't work. I couldn't do anything," said Anaya.

Anaya moved to the U.S. from El Salvador with her mother when she was 5. She turned 15 — the minimum age to qualify for DACA — right when President Donald Trump rescinded the program in 2017, and she missed out on the protection as a result.

President Trump recently announced he would soon be "taking care of DACA" and give recipients "a road to citizenship." But only Congress has the power to legalize "Dreamers." And bipartisan efforts to do so have failed multiple times in the past — sometimes due to the president himself walking away from negotiations.