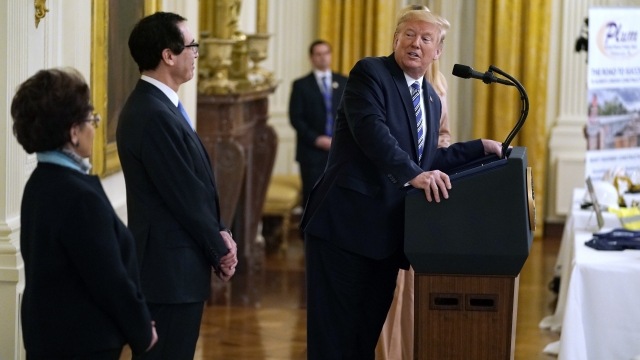 SMS
Trump Administration Looking At Tax Cuts For Next COVID-19 Aid Package
By LeeAnne Lowry
By LeeAnne Lowry
May 6, 2020
The president is prioritizing payroll tax cuts and an expansion of corporate spending deductions for meals and entertainment.
SHOW TRANSCRIPT

The Trump administration is looking at tax cuts and business liability protections from coronavirus-related lawsuits for the next aid package.

President Donald Trump has centered on a payroll tax cut as an ultimatum to sign any new bill. He's also prioritizing an expansion of corporate spending deductions for meals and entertainment.

A reduction in or elimination of the capital gains rate and measures to allow companies to deduct full costs of any investments are also being discussed.

Senate Majority Leader Mitch McConnell has pushed support for the business liability protections, saying Republicans would not let it protect companies that have been negligent.

But the president has seen some resistance in his party. Senate Finance Committee Chairman Chuck Grassley said he worries a payroll tax cut could hurt Social Security funds. But he said, QUOTE "I’m going to give it due consideration, if I can see a strong group of people who think it’s the right thing to do."