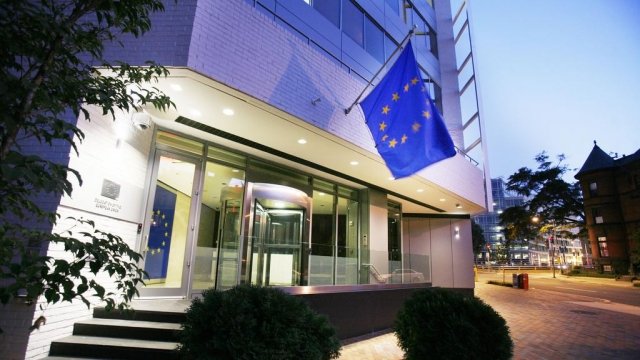 SMS
US Downgraded Status Of EU Delegation To The US — And Didn't Tell It
By Katie Cammarata
By Katie Cammarata
January 8, 2019
The European Union started suspecting something was up when its ambassador to the U.S. wasn't being invited to certain events.
SHOW TRANSCRIPT

The Trump administration reportedly downgraded the diplomatic status of the European Union's delegation to the U.S. — without letting the bloc know. That's according to a report from German news agency Deutsche Welle.

And it isn't entirely clear why the administration made the decision. The New York Times speculates it could have something to do with President Donald Trump's criticism of multilateral institutions like the EU or the United Nations.

The EU discovered the change when the ambassador to the U.S.' name wasn't called in the usual order during President George H. W. Bush's funeral.

At high profile events, diplomats' names are typically read out in chronological order, based on how long they've served as ambassador. But at Bush's funeral, EU Ambassador to the U.S. David O'Sullivan's name was read last. He's served as ambassador since 2014, and Deutsche Welle reports he should have been among the top 20 or 30 ambassadors to have their names called.

The EU had reportedly suspected something was up before the funeral because O'Sullivan wasn't invited to certain events late last year.

EU delegates in Washington reached out to the Trump administration about the apparent downgrade, and the U.S. said it "forgot" to notify them of the decision. The delegation's diplomatic status has reportedly since been reversed.