Trump Campaign Accuses Clinton Campaign Of Colluding With The DOJ 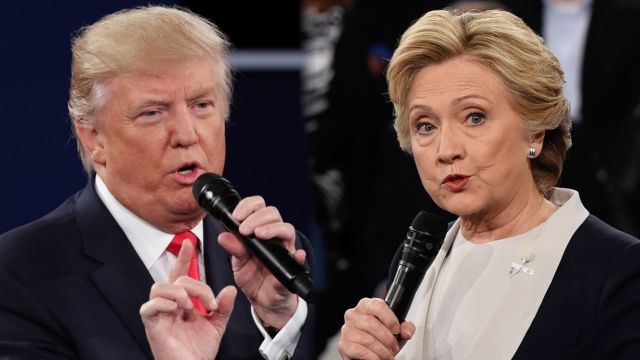 "It's just awfully good that someone with the temperament of Donald Trump is not in charge of the law in our country," Hillary Clinton said during Sunday night's debate.

"Because you'd be in jail," Donald Trump responded.

Donald Trump takes any opportunity he can get to accuse Hillary Clinton of corruption.

"Crooked Hillary, which is what she is," Trump said to Bill O'Reilly on Fox News on Tuesday.

And WikiLeaks just gave him another opportunity.

In its latest dump, the organization leaked an email from Clinton campaign press secretary Brian Fallon.

The 2015 email concerned a Freedom of Information Act lawsuit seeking the release of Clinton's emails during her time at the State Department.

Fallon said he had heard from people at the Department of Justice that a status hearing in the case would be held that day.

Trump's camp immediately jumped on the email, saying it was evidence of collusion between the campaign and the DOJ. It called for a release of all DOJ communications with the campaign.

Trump even tweeted about the email dump, calling Clinton "unfit to run."

There's just one problem. That status hearing Fallon mentioned was open to the public.

And various media outlets reported on it that day. It also came several months before the FBI — a DOJ agency — opened a criminal investigation into Clinton's emails.

According to Politico, the hearing was also included in the court's daily schedule posted online.

So yes, the idea of a campaign official communicating with the DOJ may sound suspicious. But it's actually not unheard of.

Former government ethics attorneys told Politico the campaign has a right to be given "a status update."