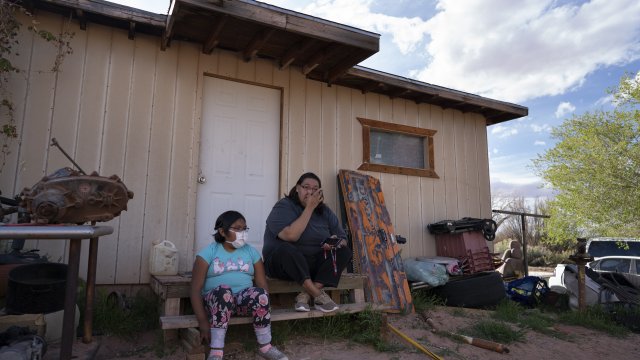 SMS
Native American Tribes Still Waiting On Help From CARES Act
By Angela M. Hill
By Angela M. Hill
May 22, 2020
Tribal communities across the country are being devastated by the coronavirus as they wait for their remaining CARES Act funds.
SHOW TRANSCRIPT

Back in March, the federal government earmarked $8 billion in aid to tribal governments as part of the CARES Act. But as these communities waited for the funding, the number of COVID-19 cases grew.

The Indian Health Services reported just over 8,000 positive cases as of May 20. And the Navajo Nation has the highest per capita rate of COVID-19 infections in the country — higher than New York.

But it wasn’t until early May that $4.8 billion of the $8 billion started flowing to tribal communities — well after the April 26 deadline set by Congress. The Treasury has yet to distribute the remaining $3.2 billion.

"So it's leaving tribes in a position where we are fighting this virus with fewer resources than we need, but also in the dark, without having a clear picture of how much funding is going to be allocated to each tribe," said Bryan Newland, chairperson of the Bay Mills Indian Community.

"Look, the reality is is that the Navajo Nation and other tribal nations need as much help as they can get right away," said Rep. Greg Stanton. "There is no need for delay and no need to portion out the money so that they don't get 100% right away."

Part of the delay in releasing the funds was over how to allocate the money across the 574 federally recognized tribes and who qualified for the funds.

Treasury included Alaskan Native Corporations, or ANCs, in their calculations — which are for-profit entities. The decision has sparked lawsuits by tribal governments.

In addition, there has been controversy over the formula used to distribute the initial round of funds.

"It isn't really connected to the responsibility that tribal governments have to take care of their tribal members during a pandemic," said Newland.

After tribes submitted all sorts of documentation to apply for the funds, including updated population data, the Treasury settled on what some say is an outdated, racial population number that is connected to a housing block grant formula.

"You know, we've got nearly 17,000 people, and based upon what they used was based on a formula comparable 5,000 people," said Chairman Mark Fox of the MHA Tribal Nation in North Dakota.

A recent study by the Harvard Project on American Indian Economic Development concluded that this formula "creates demonstrable inequity in the form of gross and frequent under‐representation and over‐representation of hundreds of tribes in the allocation process."

The Treasury Department has not made public the amount each tribe received from the first round of funding.

Researchers at the Harvard Project on American Indian Economic Development obtained the data the Treasury used and reverse-engineered the analysis to determine how much each tribe received in the first round of funds.

In some cases, the housing data indicated tribes had zero population, not reflecting their true population count as submitted by the tribes last month. This resulted in those tribes receiving the minimum funding of $100,000.

"We all should be concerned that there's there's this sort of arbitrary allocation of funds going on when tribes are so desperate," said Professor Joseph Kalt of Harvard University and co-author of the study. "Their economies have been devastated."

Newsy reached out to the Treasury Department, but it did not respond to a request for an interview.

The Treasury has asked tribes to submit additional financial and employment information by May 26 in order to receive the remaining $3.2 billion.

Sources say tribal leaders were told the Treasury expects to begin distributing the funds as early as June 5.

"At the end of the day, the people who are going to pay the price are Indian people in our communities whose health and safety is at risk," said Newland of the Bay Mills Indian Community.