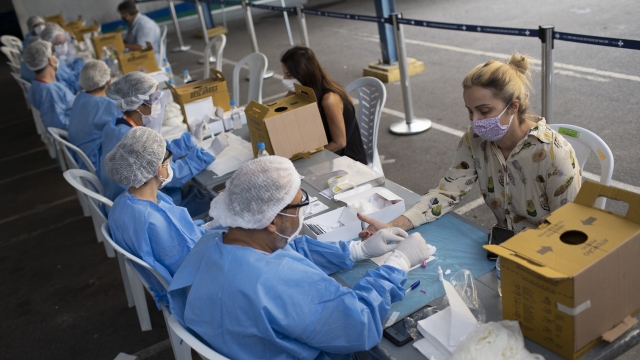 The deadly toll rolls on in Brazil, with the country topping 2.1 million COVID-19 cases and, now, 81,000 fatalities.

Amid this grim backdrop, a 27-year-old doctor named Stephania Teixeira Porto volunteered to receive what she called a "courage injection."

Texieria Porto is one of 9,000 volunteers — all health care workers — who signed up to participate in clinical trials for an emergency coronavirus vaccine being produced by a Chinese pharmaceutical company, Sinovac.

The three-month vaccine trials began Tuesday in five Brazilian states. Joao Doria, the governor of the state of Sao Paulo, said Brazil is prepared to produce 120 million vaccine doses for use in his country. If the drug is proven effective, production could begin at the start of 2021.

The governor was on hand Tuesday as Texieria Porto was about to be injected with the vaccine or a placebo.

In a word, this moment in Brazil is awful. The country of 209 million people is second to the U.S. in COVID-19 illnesses and deaths. On Tuesday alone, Brazil reported more the 41,000 new infections and 1,367 deaths.

Last month, clinical trials began in South Africa for a COVID-19 vaccine being developed by Oxford University. Those trials are also to be conducted in Brazil and Britain.

Medical researchers say Brazil is a crucial testing ground for a coronavirus vaccine. That's because it may show whether a potential cure can work amid such a vast presence — and spread — of the virus.