The US May Have To Stop Borrowing Money Sometime This Year 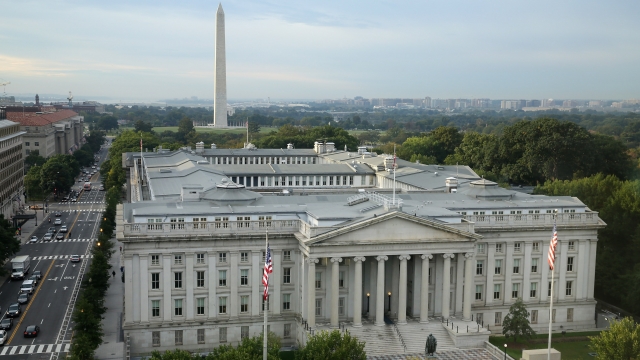 A Treasury official says if the debt ceiling isn't raised soon, the U.S. could default on its debt.

The Treasury Department could have to stop borrowing money sometime this year if Congress does not raise the federal borrowing limit.

In a statement Wednesday, Treasury Deputy Assistant Secretary Brian Smith said the department "expects that extraordinary measures will be exhausted sometime in the second half of 2019."

Here are the basics: The U.S. is spending more money than it's bringing in. Congress is in charge of issuing the nation's "debt ceiling," which puts a cap on how much money the U.S. can borrow to pay its bills. Last year, Congress voted to suspend the debt ceiling through March 1, 2019 as part of the Bipartisan Budget Act of 2018. Since then, Smith says, the department has been using "extraordinary measures to finance the government on a temporary basis."

There have been debates over whether there should even be a debt ceiling. Economists and policymakers have urged the U.S. to eliminate it. Treasury Secretary Steven Mnuchin previously proposed raising the limit automatically every time Congress appropriates future spending.

So, what happens if Congress doesn't raise the ceiling? The U.S. will default on its debt. Experts say the stock market could crash, which could cause political and economic crises.