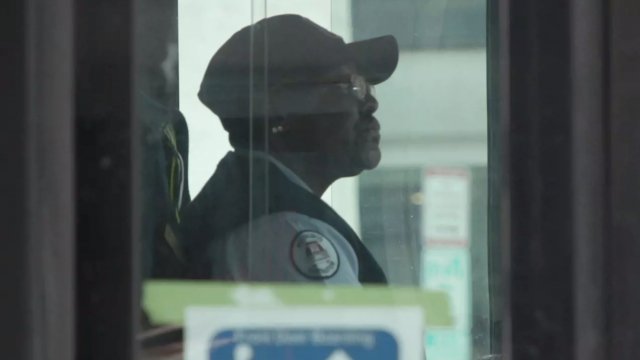 WASHINGTON — Trapped in a box with coronavirus.

That’s what Miami bus operator Angie Dowtin says it feels like to drive her route during the pandemic.

“We’re deathly afraid out here,” she said. “People get on the bus, they’re talking, coughing, drinking, laughing, sneezing. They’re doing it all, and we’re encased in a 40-foot box.”

Newsy checked in with the top 10 largest transit systems in the country and found thousands of workers on bus and subway systems have tested positive for COVID-19, with numbers increasing by the day.

The MBTA in Boston has had 89 cases and one death.

And Chicago’s CTA has had 138 cases and three deaths.

“There’s folks dying out here,” Detroit bus driver Jason Hargrove said in a Facebook Live video he posted last month. “This is real. We’re out here trying to move the city around, trying to do our jobs and be professional about what we do."

Hargrove later got the virus himself and died.

John Costa is the president of the Amalgamated Transit Union.

“Each night I have to make a phone call to one of my local business agents giving them my condolences about one of our brothers and sisters,” he said. “For a while there, I was doing four a night.”

Transit agencies have made changes to protect drivers: stricter cleaning procedures, asking passengers to wear masks, boarding buses from the back to keep distance from drivers.

But there are times Dowtin says bus drivers must come close to a passenger, especially when securing a wheelchair.

“There’s no way around it,” she said.

Miami, where she works, says it’s struggling to get enough masks.

Costa said only 47% of workers have all the personal protective equipment they need.