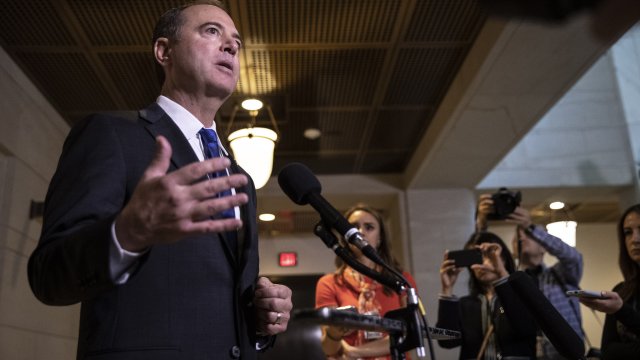 The transcripts show Yovanovitch's concerns about President Trump's personal attorney, Rudy Giuliani, who she alleges was running a shadow operation to undermine her and the official U.S. policy she was conducting, instead seeking to benefit the president.

She recalls her confusion and concern about being removed from her post by Deputy Secretary of State John Sullivan.

She told investigators she told Sullivan, "I thought this was a dangerous precedent, that as far as I could tell, since I didn't have any other explanation, that private interests and people who don't like a particular American ambassador could combine to, you know, find somebody who was more suitable for their interests."

Yovanovitch says she asked the U.S. Ambassador to the Euoprean Union Gordon Sondland for advice in handling attacks from the president and Fox News host Sean Hannity. She says Sondland told her to praise President Trump on Twitter. The former ambassador also said she felt "shocked" and "threatened" by the president's tweets about her.

McKinley, a career foreign service employee who most recently was Secretary of State Mike Pompeo's senior adviser, says he raised concerns about the public treatment of Ambassador Yovanovitch directly to Pompeo, even asking to put out a statement of support. He said he "did not" get the sense the department was supportive, in part because President Trump might undermine the statement.

McKinley said "the timing of my resignation was a result of two overriding concerns: the failure of the State Department to offer support to Foreign Service employees and by what appears to be the utilization of our ambassadors overseas to advance domestic political objectives."

House Intel Committee Chairman Adam Schiff, who, per the House-passed resolution, is now officially leading this inquiry, says the transcripts show a coordinated effort to benefit the president's political career over the country's national security. He says they also debunk the idea that Republicans were shut out.

This release comes as four more White House officials ignored subpoenas, something Schiff says could be further evidence of obstruction of Congress. The House committees have a full schedule of witnesses for this week, including former national security adviser John Bolton. It's not clear if he'll show. Regardless, Republicans say these proceedings are continuing to head in the wrong direction.

"I've got the transcript, which I've read. I've got media reports which I've paid attention to. And I've got colleagues that have been sitting in the room. None of them think this rises to the level of impeachment," said Oklahoma Republican Rep. Tom Cole.

Bolton may be waiting for a judge to rule on the case of his deputy, Charles Kupperman, who asked the D.C. District Court to decide whether he should listen to a White House demand not to testify or comply with the House subpoena. White House officials are also arguing a separate case, saying  former White House counsel Don McGahn and other current and former senior officials have "absolute immunity" from being questioned.

Transcripts from the questioning of both EU Ambassador Gordon Sondland and former envoy to Ukraine Kurt Volker are expected Tuesday. Democrats say more are coming the rest of the week. Public hearings are expected in the coming weeks.