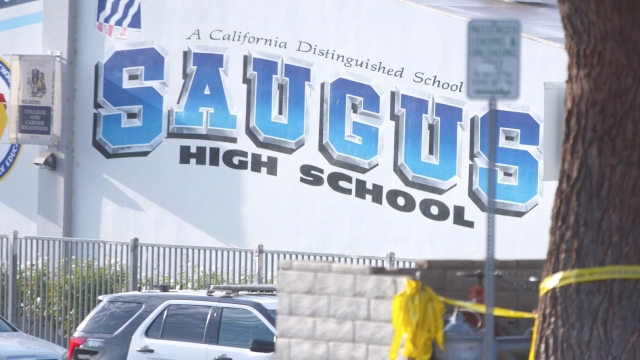 Schools are closed Friday in the Hart School District, one day after the shooting at Saugus High School which is closed off here.

Students we’ve spoken with are still in shock, but some that I spoke with say they feel safe. That may have to do with how the school prepared for the likelihood of a shooting.

In 2018, Saugus High School issued a 245-page safety plan for a variety of emergencies.  In August 2019, the Hart High School District, which includes Saugus High School, spent more than $1.05 million to extend a safety contract with the Los Angeles County Sheriff's Department.

Schools in the district began holding lockdown drills several years ago, and at a news conference Louie-Marc Contreras credited the use of stop of bleed kits to help the victims in the minutes after the shooting.

Stop the bleed is a national initiative to train bystanders to help in a bleeding emergency before professional help arrives. The kits and training include wound packing items and tourniquets. The LA County Sheriff says off-duty officers who were dropping their kids off for school Thursday used the kits to render aid before EMS arrived on scene.

Also part of that safety plan: mental health counseling. A school district spokesperson tells me crisis counselors are providing help throughout Friday and the weekend.