Train Makes First Trip Between Koreas In More Than A Decade 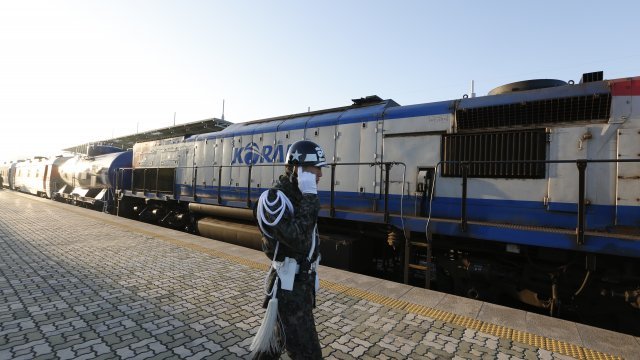 A train has made the journey from South Korea to North Korea for the first time in more than a decade.

The train, loaded with rail inspectors and extra fuel for the journey back, crossed the border Friday morning. It will carry out a survey of North Korean railways to determine what kind of updates they'd need to be connected to their South Korean counterparts.

South Korean president Moon Jae-in proposed an interconnected railway system in a speech earlier this year, but there's a lot of work that needs to be done to realize his proposal.

Part of that would be a major revamping of North Korean rails, which are reportedly too outdated to accommodate more advanced South Korean trains. There's also the issue of international sanctions on the country, which prevent the train expedition from purchasing supplies like food or fuel from the North.

U.S. diplomatic progress with Pyongyang has stalled recently over de-nuclearization. President Donald Trump is scheduled to meet with Moon at the G20 summit in Argentina this weekend.