Tracking The Spread Of Monkeypox In The U.S. 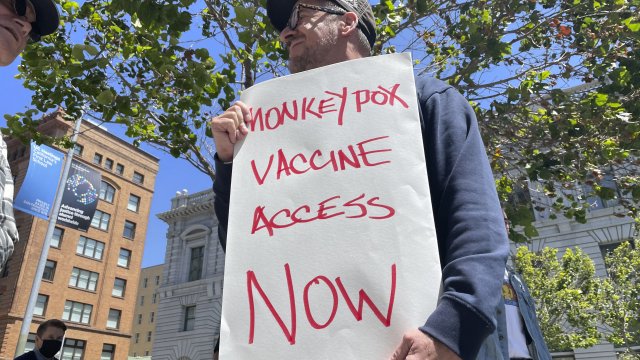 As monkeypox case numbers skyrocket across the U.S., alarm bells are growing louder.

The Biden administration may declare monkeypox a public health emergency as soon as Friday, according to Politico.

The move would open up more dedicated funding and staff for the Department of Health and Human Services.

But for some, it’s too little, too late.

“I think the outbreak can still be contained but will take dramatic action on the part of federal authorities helping to get vaccines and treatment out to people quickly," said Monkeypox patient Kyle Planck. "I think there was a window in early May and June to control it that we missed and now it's a lot larger of a problem than we would hope.”

According to the CDC there have been more than 4,600 confirmed monkeypox cases here in the U.S. The epicenter is New York, with more than 1,200 cases. California, Illinois and Florida also have high case numbers.

The monkeypox virus mainly spreads through skin-on-skin contact. The vast majority of cases have been reported in men who have sex with men.

But anyone can become infected with direct exposure, including children.

The CDC says at least two kids in the U.S. have tested positive.

Concerns about transmission are growing. Available monkeypox vaccine doses are hard to come by.

And advocates say distribution of the vaccines we do have has been poorly managed.