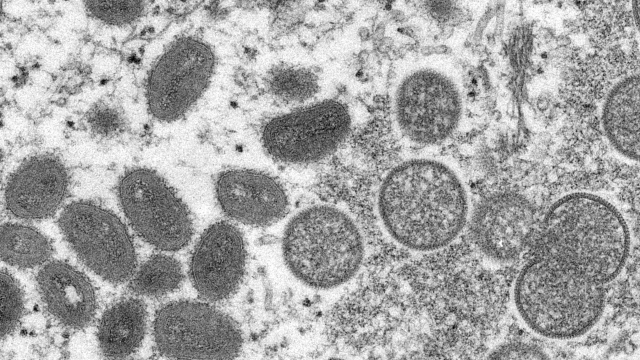 The latest numbers from Our World In Data show about 7,000 cases of monkeypox have been reported in 58 countries.

For perspective, the world is seeing three times the number of monkeypox cases it's had in 30 years.

We're still in the early days with this outbreak science-wise, with more questions than answers. But what we do know is a lesson from COVID — testing is crucial at this stage.

The World Health Organization says testing and sharing the genetic sequence of this new monkeypox strain is key to slowing the current outbreak.

"What we are actually seeing at the moment is like the drunk man looking for his keys under the lamppost. We're only looking in the light, not in the dark, and that's the problem," Ryan continued.

The CDC is ramping up testing for U.S. monkeypox cases.

One of five major labs — Labcorp — is the first in the fold. It's expected to run up to 10,000 tests per week, doubling the CDC's current ability.

As of July 6, 605 known monkeypox cases have been counted in the U.S. California, New York, Florida, Illinois, and Washington, D.C. make up more than half of them.

Wastewater from California's Bay Area could be the most accurate prediction of what's to come.

Wastewater counts have proved vital for tracking COVID as new variants have continued to spread. And it's the same for monkeypox.

Newsy reconnected with Alexandria Boehm, who oversees the Sewer Coronavirus Alert Network. She said since late June, monkeypox DNA has been showing up consistently in wastewater.

"There is some data suggesting that it can be excreted in feces and urine," she said. "It can also be emitted from sores that are present on the skin. So when you take a shower, for example, if you have monkeypox, some of that monkeypox virus can end up in wastewater just from being washed from the skin surface."

The gist is that the data covers gaps that get missed from human testing.

So, if there aren't as many monkeypox tests to go around, it still shows up in wastewater.

"We're really looking at presence, absence in wastewater and repeated detection of the monkeypox viral DNA in wastewater," epidemiologist Dr. Eric Feigl-Ding said. "The fact that it's showing up in the community wastewater levels means that cases are much higher than we want to admit."

Feigl-Ding says wastewater is crucial to tracking spread to cover for the current gap challenges in testing and diagnosis.

Another conflict is something called testing bias. With monkeypox, the majority of cases have been found in men who've had sex with men.

It's unclear at this point whether cases are more prominent in men who have sex with men or if that's because the early case definition focused on that group.

The CDC main case definition included that. It changed who was eligible for a test in late June after pushback from outside scientists.

The CDC says monkeypox spreads person-to-person from contact with the sores or scabs, or through respiratory droplets or oral fluids through close intimate contact. You can also get monkeypox from touching recently contaminated clothing or bedding used by an infected person.

CDC officials have said a challenge is getting clinicians to recognize monkeypox. Some of the literature shows this version's skin bumps look less severe than previous outbreaks.

Doctors should be testing patients for monkeypox if they show any bumpy rash, and labs should be running them.

If you think you may have a case but are struggling to get tested, doctors say you can swab and freeze a sore's liquid discharge while you try to gain access to a test.