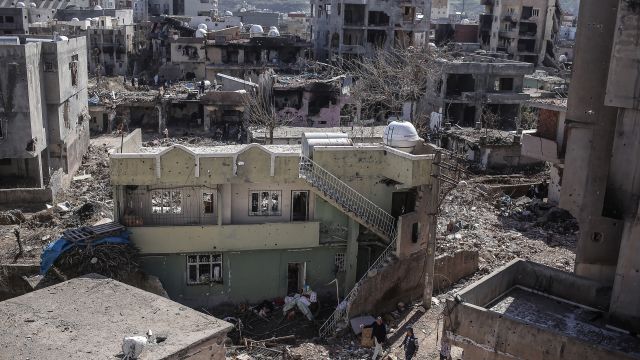 SMS
This Border Town Is Again At The Center Of The Tension In Turkey
By Melissa Prax
By Melissa Prax
August 26, 2016
A bombing that killed at least 11 police officers is another attack the Turkish government is blaming on the Kurdistan Workers' Party.
SHOW TRANSCRIPT

This is the aftermath of a bombing that killed at least 11 police officers and injured dozens of people in Turkey. It's bringing attention back to Cizre — a town near the Syrian border.

Cizre is a tense area due to frequent clashes between the Kurdistan Workers' Party, or PKK, and the Turkish government.

We should note the U.S. and the European Union agree with Turkey that the PKK is a terrorist group.

So it wasn't surprising when Turkey's prime minister and other officials in the country quickly blamed the PKK for the attack. The bombing was reportedly at a check point and near a police headquarters.

But several attacks from both sides have been carried out in recent months since a cease-fire negotiation fell through last year.

Cizre has been subjected to on-again-off-again curfews by Turkish forces. Residents who stayed said they were cut off from necessities, and those who fled came back to destroyed buildings.

The International Crisis Group has warned that "neither the Turkish state nor PKK can win by military means."

And they're not the only humanitarian watch group that's voiced concern.

In May, the United Nations pushed for an investigation into reports that around 100 civilians were burned to death in Cizre basements by Turkish security forces.

Despite the previous cease-fire and calls for peace, this time, the Turkish government doesn't seem willing to talk with PKK leaders until the group surrenders weapons.