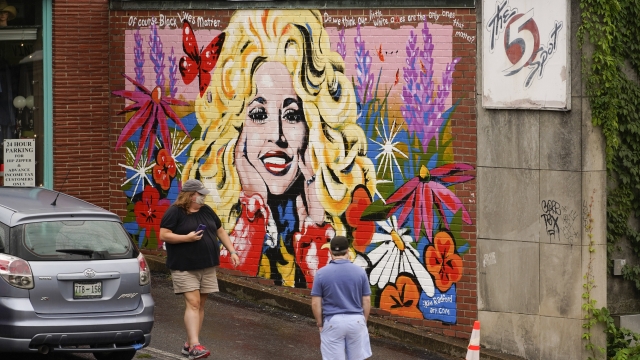 SMS
Tourists Flock To Dolly Parton Mural Supporting Black Lives Matter
By LeeAnne Lowry
By LeeAnne Lowry
August 22, 2020
The mural is in an area where rising housing costs are pushing out many people of color whose families have been there for generations.
SHOW TRANSCRIPT

There's a new mural for Dolly Parton in Nashville, Tennessee, paying tribute to her comments in support of Black Lives Matter.

Parton told Billboard recently "of course Black lives matter," going on to say that "of course" White people aren't the only ones that matter.

Kim Radford, the artist behind the mural, says she was drawn to Parton's quote because it is "so sassy and a sensitive comment about something’s that got a lot of friction in the air right now.”

Tourists are flocking to Music City to see the mural, which has been in East Nashville since Aug. 14. That location is significant — East Nashville was predominantly African American following the Civil War. It's been rapidly gentrified in recent years, with rising property values pushing out many people of color whose families have been there for generations.

Following the death of George Floyd, outraged civil rights activists camped out just two miles from the neighborhood. They claimed space outside of the state Capitol as an autonomous zone.

The impact of gentrification in East Nashville was amplified this year after it was hit by a tornado in March, killing 24 people and damaging over 500 homes and businesses. The Tennessean reports developers quickly started offering to buy up damaged homes, as many who couldn't afford repairs were forced out.

After the tornado, one woman told the paper, "In one fell swoop, the character and history that is so essential to the black experience in Nashville could be gone."