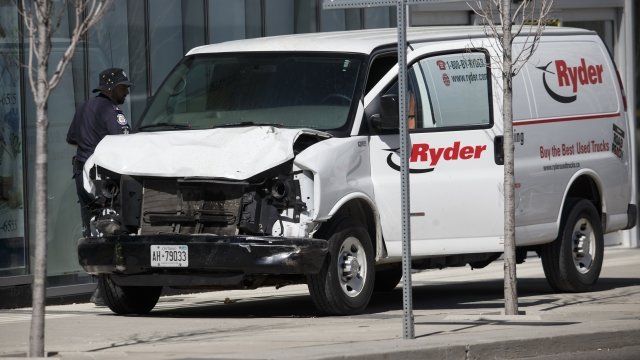 SMS
Toronto Van Attack Suspect Charged With First-Degree Murder
By Katherine Biek
By Katherine Biek
April 24, 2018
Police say the 25-year-old suspect used a rental van to mow down pedestrians along one of the busiest streets in Canada Monday.
SHOW TRANSCRIPT

The man police say drove a van into a crowd of people in Toronto on Monday has been charged with 10 counts of first degree murder and 13 counts of attempted murder. He appeared in court Tuesday morning.

The 25-year-old suspect allegedly used a rental van to mow down pedestrians along one of the busiest streets in Canada. Ten people died in the incident and another 15 were injured. Police arrested the suspect shortly after the first 911 call.

He did not provide an update on a possible motive behind the attack but did note that investigators don't think it was terrorism-related.