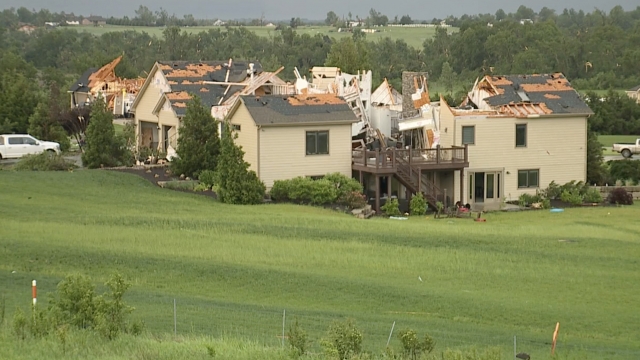 Another round of severe storms caused major damage across the central U.S. on Tuesday.

More than 13,000 people lost power from the storm, which moved eastward. The Kansas City International Airport briefly closed for several hours Tuesday night so field maintenance crews could clear debris from the airfield. It was back up and running just after midnight Wednesday.

A warning coordination meteorologist for the National Weather Service's Storm Prediction Center told multiple outlets that Tuesday marked the 12th straight day where at least eight tornadoes were reported in the U.S.

Beyond Kansas, officials confirmed a tornado also touched down in Pennsylvania. The storm reportedly dropped "marble-sized hail" on the area.

The weather forecast for parts of the U.S. on Wednesday isn't looking a whole lot clearer. The weather service says residents living in parts of Texas all the way up through the Mid-Atlantic Region can expect to see severe thunderstorms. And meteorologists predict heavy rains will fall down on parts of Missouri, Iowa and Illinois — possibly at a rate of 3 inches per hour.