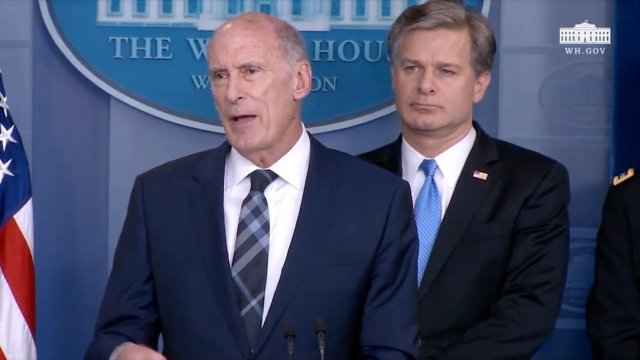 President Donald Trump has assigned some of his top administration officials to fight election interference.

In a press briefing Thursday, National Intelligence Director Dan Coats said based on the lessons learned from the 2016 presidential election, the group is implementing a "broad spectrum of actions" to make sure the same thing doesn't happen in the upcoming midterms.

Secretary of Homeland Security Kirstjen Nielsen said, "Our democracy itself is in the crosshairs."

"As I have said consistently, Russia attempted to interfere with the last election and continues to engage in malign influence operations to this day. This is a threat we need to take extremely seriously," said Wray.

Coats said they are currently tracking Russian attempts at interference.

"Relative to what we have seen for the midterm elections, it is not the kind of robust campaign that we assessed in the 2016 election," Coats said. "They stepped up their game big-time in 2016. We have not seen that kind of robust effort from them so far."