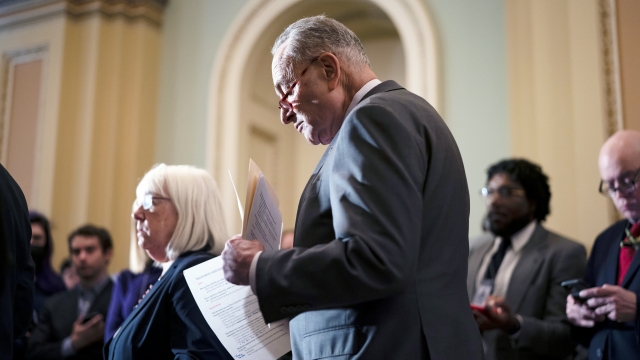 Congressional leaders reached a bipartisan deal early Wednesday providing $13.6 billion to help Ukraine and European allies plus billions more to battle the pandemic as part of an overdue $1.5 trillion measure financing federal agencies for the rest of this year.

Though a tiny fraction of the massive bill, the money countering a Russian blitzkrieg that's devastated parts of Ukraine and prompted Europe's worst refugee crisis since World War II ensured the measure would pass with robust bipartisan support. President Joe Biden requested $10 billion for military, humanitarian and economic aid last week, and Democratic and Republican backing was so staunch that the figure grew to $12 billion Monday and $13.6 billion just a day later.

"We're going to support them against tyranny, oppression, violent acts of subjugation," President Biden said at the White House.

Party leaders planned to whip the 2,741-page measure through the House on Wednesday and the Senate by week's end, though that chamber's exact timing was unclear. Lawmakers were spurred by the urgency of helping Ukraine before Russia's military might makes it too late.

They also faced a Friday deadline to approve the government-wide spending measure or face a weekend election-year federal shutdown. As a backstop against delays, the House planned to pass a bill Wednesday keeping agencies afloat through March 15.

Over $4 billion of the Ukraine aid was to help the country and Eastern European nations cope with the 2 million refugees who've already fled the fighting. Another $6.7 billion was for the deployment of U.S. troops and equipment to the region and to transfer American military items to Ukraine and U.S. allies, and there was economic aid and money to enforce economic sanctions against Russia as well.

"War in Europe has focused the energies of Congress to getting something done and getting it done fast," said Senate Majority Leader Chuck Schumer.

Senate Minority Leader Mitch McConnell said the measure would provide loan guarantees to Poland to help it replace aircraft it is sending Ukraine. "It's been like pulling teeth" to get Democrats to agree to some of the defense spending, he said. But he added, "It's an important step. It needs to be passed. It needs to be passed quickly."

The bipartisan rallying behind the Ukraine aid was just one manifestation of Congress' eagerness to help the beleaguered country, though not all of it has been harmonious.

Republicans accused President Biden of moving too slowly to help Ukraine and NATO allies and to impose sanctions against Russia and its president, Vladimir Putin. Democrats countered that time was needed to bring along European allies that rely heavily on Russian energy sources. And a bipartisan push to ban Russian oil imports had become nearly unstoppable before President Biden announced Tuesday that he would do that on his own.

The huge overall bill was stocked with victories for both parties.

In contrast, President Biden's 2022 budget last spring proposed a 16% increase for domestic programs and less than 2% more for defense — numbers that were doomed from the start thanks to Democrats' slender congressional majorities.

The bill was also fueled by large numbers of hometown projects for both parties' lawmakers, which Congress had banned since 2011 but were revived this year. The spending — once called earmarks, now dubbed community projects — includes money for courthouses in Connecticut and Tennessee and repairs to a post office in West Virginia. And it names a federal building in Tuscaloosa, Alabama, after Sen. Richard Shelby, the state's senior GOP senator, a chief author of the bill who's retiring after six terms.

Democrats won $15.6 billion for a fresh round of spending for vaccines, testing and treatments for COVID-19, including $5 billion for fighting the pandemic around the world. That was below President Biden's $22.5 billion request.

Republicans said they'd forced Democrats to pay for the entire amount by pulling back money from COVID-19 relief bills enacted previously. Much of the money was to go to help states and businesses cope with the toll of the pandemic.

Citizenship and Immigration Services would get funds to reduce huge backlogs of people trying to enter the U.S. There would be fresh efforts to bolster renewable energy and curb pollution, with some of that aimed specifically at communities of color.

There is added funding to build affordable housing. And the measure distributes billions of dollars initially provided by the bipartisan infrastructure bill enacted last year for road, rail and airport projects.

The bill renews programs protecting women against domestic violence and requires many infrastructure operators to report significant cyberattacks and ransomware demands to federal authorities. The Defense Department would have to report on extremist ideologies within the ranks.

The measure retains strict decades-old curbs against using federal money for nearly all abortions. It has $300 million in military assistance for Ukraine and $300 million to help nearby countries like the Baltic nations and Poland. Service members would get 2.7% pay raises, and Navy shipbuilding would get a boost in a counter to China.