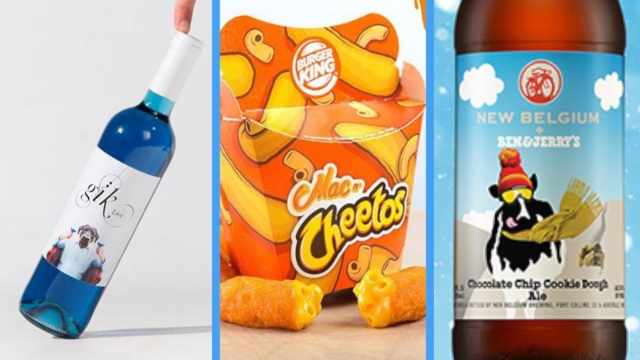 Every so often, a new food or drink just makes us wonder, "What were they thinking?"

Sometimes companies announce new food and drinks we can't wait to get our mouths on. (Hello, Girl Scout Cookie baking mixes from Pillsbury.) But other weeks, we hear about new items that we would never ever think about putting in our pantries.

Like an electric blue wine. It's made by a Spanish company and is called Blue Nun.

According to Eater, the product has been sold in Spain for a year already and is now expanding into other European countries, including Germany and France.

The wine reportedly tastes similar to a sweet white wine, and it gets its vibrant blue color from a sweetener and a specific pigment found in grape skin.

We're still confused over how Cheetos and mac 'n' cheese seemed like a good combination.

But Burger King told the Consumerist it's targeting customers who "wished they could eat warm mac 'n' cheese like they do a bag of chips."

Burger King will sell the 310-calorie snack at select locations beginning Monday. It also comes with a side of ranch.

Finally, two things we would have never dreamed of putting together: cookie dough and beer.

Ben & Jerry's is once again teaming up with the New Belgium Brewing Co., and this time they're creating Chocolate Chip Cookie Dough Ale.

A portion of the proceeds for the new cookie dough-tasting beer will be donated to a nonprofit that raises awareness for climate change.