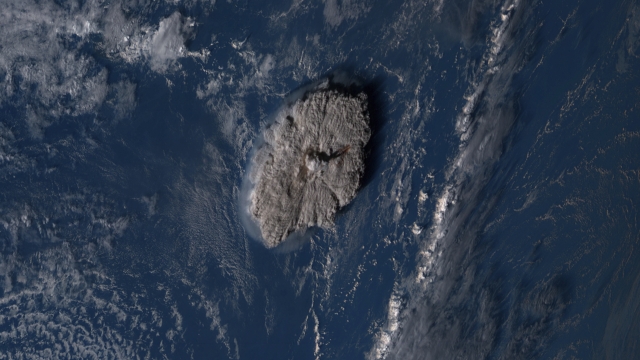 The volcano erupted Friday near the Pacific island Tonga, shooting ash into the atmosphere and prompting tsunami warnings around the globe.

New Zealand and Australia were able to send military surveillance flights to Tonga on Monday to assess the damage a huge undersea volcanic eruption left in the Pacific island nation.

A British woman who was missing has been found dead, her family said, in the first reported fatality on Tonga. The brother of Angela Glover, who ran an animal rescue center, said the 50-year-old died after being swept away by a wave.

Scientists say the exceptionally hot year is part of a long-term warming trend that shows hints of accelerating.

Communications with Tonga remained extremely limited. The company that owns the single underwater fiber-optic cable that connects the island nation to the rest of the world said it likely was severed in the eruption and repairs could take weeks.

The loss of the cable leaves most Tongans unable to use the internet or make phone calls abroad. Those that have managed to get messages out described their country as looking like a moonscape as they began cleaning up from the tsunami waves and volcanic ash fall.

Satellite images showed the spectacular undersea eruption Saturday evening, with a plume of ash, steam and gas rising like a giant mushroom above the South Pacific waters.

A sonic boom could be heard as far away as Alaska and sent pressure shockwaves around the planet twice, altering atmospheric pressure that may have briefly helped clear out the fog in Seattle, according to the National Weather Service. Large waves were detected as far away as the Caribbean due to pressure changes generated by the eruption.

Dave Snider, the tsunami warning coordinator for the National Tsunami Warning Center in Palmer, Alaska, said it was very unusual for a volcanic eruption to affect an entire ocean basin, and the spectacle was both “humbling and scary.”

The U.S. Geological Survey estimated the eruption caused the equivalent of a magnitude 5.8 earthquake. Scientists said tsunamis generated by volcanoes rather than earthquakes are relatively rare.

The explosion of the Hunga Tonga Hunga Ha’apai volcano, about 40 miles north of Nuku’alofa, was the latest in a series of dramatic eruptions. In late 2014 and early 2015, eruptions created a small new island and disrupted international air travel to the Pacific archipelago for several days.