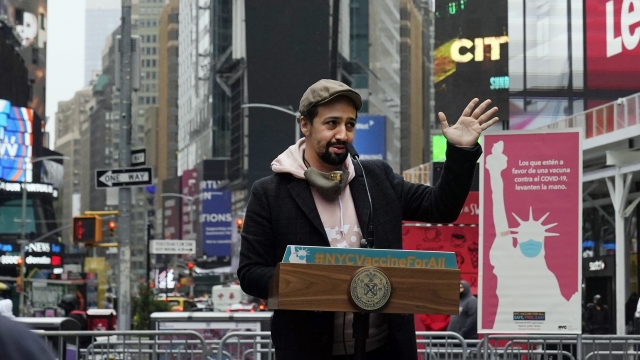 SMS
Times Square Site To Jump-Start Broadway Industry
By Robin Dich
By Robin Dich
April 13, 2021
Lin-Manuel Miranda said the industry is anxious to perform again, but they can't do it until everyone feels safe.
SHOW TRANSCRIPT

Broadway has been shuttered by the pandemic, but New York City Mayor Bill de Blasio hopes it can reopen soon.

Yesterday the city opened a new vaccination site in Times Square in hopes of jump-starting the entertainment industry.

There was a really nice performance to open the site. Imagine, going to get a shot and getting some music – live music.

Hamilton creator, Lin-Manuel Miranda was in the crowd. He helped launch the site.

Miranda said he and the rest of the industry are anxious to perform again, but they can't do it until everyone feels safe and gets vaccinated.