Trump Might Tariff Nearly Everything From China. How Did We Get Here? 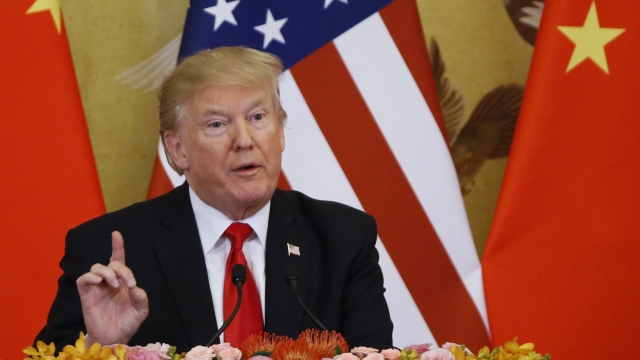 President Trump announced plans to add a new 10% tariff on $300 billion of Chinese imports. It's just the latest threat in a trade war that's been ongoing for more than a year. So how did we get here?

The Trump administration levied the first round of tariffs on China on July 6, 2018. That effort hit $34 billion in goods with a 25% tariff. It targeted cars, helicopters, airplanes, dozens of auto parts and a lot of machinery, like the kind you would find in factories.

Two and a half months later, the U.S. added $16 billion worth of Chinese products to the tariff schedule. This round targeted chemical components, train parts and motorcycles.

One month later, on Sept. 24, 2018, the list of items greatly expanded. The Trump administration added an additional 10% fee to $200 billion of goods. That was upped to 25% on May 10, 2019. This list included thousands of items, from paper products and fabrics to car parts and yachts.

The new $300 billion proposed tariff list includes a wide range of everyday items that would be subject to the new 10% tariff. It lists all sorts of clothing, microwaves, flat-screen TVs, lawnmowers, plastic products and Christmas decorations.

Last year, the U.S. imported just under $540 billion in goods from China. If President Trump follows through on his latest tariff threat, the U.S. will have tariffs on $550 billion worth of Chinese goods, which means there will be an added fee on pretty much everything Americans get from China.