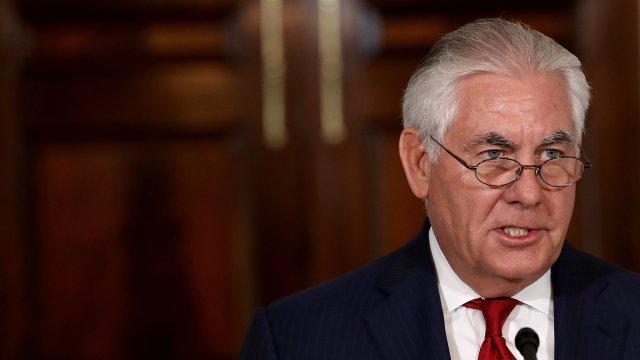 SMS
NATO Chief Says He Isn't Concerned With Rumors Of Tillerson's Ouster
By Lindsey Pulse
By Lindsey Pulse
December 5, 2017
Secretary of State Rex Tillerson may use a meeting with NATO officials as a chance to reaffirm the U.S.' commitment to the alliance.
SHOW TRANSCRIPT

Secretary of State Rex Tillerson is meeting up with NATO officials on Tuesday — here's the plan.

The meetings will take place in Brussels, Belgium. Tillerson will talk with NATO Secretary General Jens Stoltenberg. Then he'll take a NATO "family photo" and go to a working dinner.

There's not a concrete list of talking points, but the head of the State Department may reaffirm U.S. commitment to the alliance.

NATO's chief said he's looking forward to talking with Tillerson and that he's not fazed by recent rumors of Tillerson's ouster.

The New York Times reported that the White House had crafted a plan to replace Tillerson with current CIA Director Mike Pompeo. Both Tillerson and President Donald Trump have dismissed the rumors.