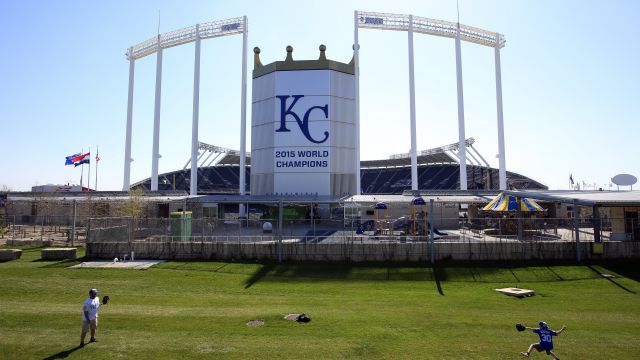 Opening night for the 2015 World Series champions came with a really long first pitch — and its own hashtag.

Thousands of Kansas City Royals fans helped #RelaytheWay to kick off the first game of the season.

The pitch started at Union Station on Sunday morning with Sly James, the mayor of Kansas City, Mo. Then, with the help of thousands of participants, the ball continued along the nearly 9.5-mile route to Kauffman Stadium.

To become part of the pitch, fans donated to the new MLB Urban Youth Academy in Kansas City. Once completed, the project will include an indoor training facility and four sports diamonds. But the center will be about more than baseball. It will also provide kids with tutoring, career training and college prep — all for free.

The first pitch will be completed at the start of the Royals game against the New York Mets — the same team the Royals beat to win the 2015 World Series.

This video includes clips from Relay the Way, The City of Kansas City and KSHB and images from Getty Images and Kansas City Mayor Sly James.