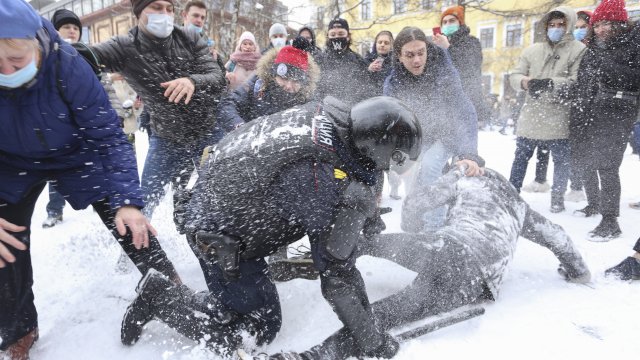 Tens of thousands of protesters took to the streets of Russia — demanding the release of imprisoned opposition leader, Alexei Navalny.

On Sunday, more than 4,000 arrests were reported across Russia during its second weekend of nationwide protests. Now Navalny's wife and brother have been detained.

Observers are expecting more this week as Navalny faces a court hearing Tuesday.

Navalny is facing up to three and a half years more in prison on what his supporters call trumped up charges stemming from his ongoing battle against Russian President Vladimir Putin.

Navalny was arrested earlier this month after returning to Russia.

He spent five months in Germany where he was recovering from a poisoning he blames on the Kremlin. Authorities have denied involvement.

Russian authorities have since searched two of Navalny's office, his apartment and attempted to search another apartment where his wife, Yulia Navalnaya, is living.

Navalnaya was reportedly detained by Russian police in Moscow and his brother Oleg was arrested.

Despite threats of arrest, social media warnings and police presence — organizers are vowing to continue demonstrations...including Tuesday when he appears in court.

But analysts tell the Guardian that the Kremlin is not overly concerned with backlash from inside the country and is indifferent to complaints from around the world, including the U.S.