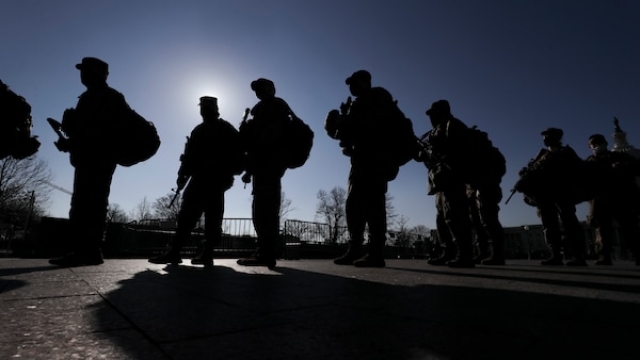 Newsy has learned thousands of National Guard members will remain in D.C. after the FBI raised concerns of possible violent protests.

Newsy has learned the reason thousands of National Guardsmen will remain here in the Washington area until mid-March. There are concerns of possible violence during upcoming protests.

“There are several upcoming events, we don’t know what they are, over the next several weeks, and they are concerned there could be situations where there are lawful protests, First Amendment-protected protests that could be used by malicious actors or other problems that could emerge,” acting Secretary of the Army John Whitley said.

The National Park Service released this list of approved protest permits to Newsy, which includes at least two First Amendment rallies within the first two weeks of March. Not listed? This gun rights group. In the past it held an unarmed rally in D.C, but most recently it held armed events, including a protest at the Virginia Capitol. And now it's promising a 2021 Rally in D.C., and military sources believe that may come by the end of the month.

The acting secretary of the Army approved the request from multiple agencies asking for the Guard to stay.

The exact reason for the concern is not clear, and the Washington Metropolitan Police Department refused Newsy’s request to provide more information.

Right now there are nearly 13,000 Guard members in the area, but we expect around 5,000 to still be here by mid-March.